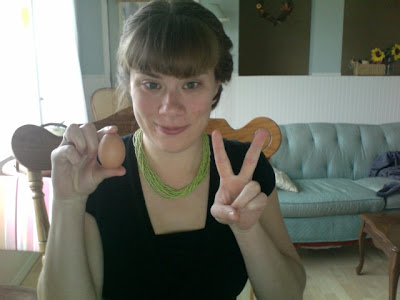 From Backyard to Table Top! 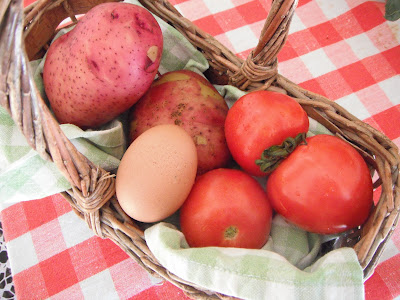 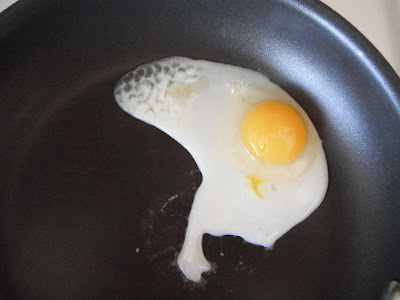 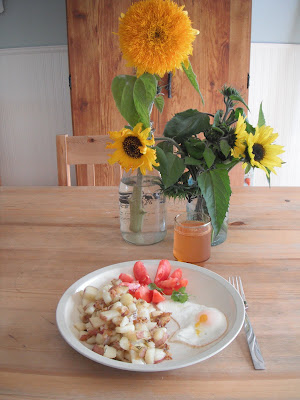 Done! I finished a lovely meal that came from my backyard! Another dream realized.
Meal:
Hashbrowns- made from backyard potatoes and herbs
Tomato- grown in same yard
Apple juice- fresh squished from apples grown in above mentioned yard
Fried egg- from hen raised by me for over 5 months, living in... you guessed it, my backyard!
oh, and I enjoyed eating it all next to a bouquet of sunflowers grown in...ok you get the idea!
Posted by Kris at 1:48 PM 2 comments:

So, I was just at the District Office, paying my utilities, when it slipped out that I had chickens. "In town?" they asked. "Yes..."I squeaked out. "How many?" they asked. "Three..." I said with a gulp. "Oh, that's fine. You can have up to eight!" Phew, what a relief, I kinda thought my chickens were illegal. But that makes me feel a whole lot better.
I walked home from the district office feeling elated, and thought I should go check in with my not-so-rebellious chickens. But they were all hanging out in the coop. Hmmm, that's odd. They never go up there except at night. I lured them back down and sort of peeked through their door. Nothing unusual, but I thought I better go around the back and stir around their wood shavings, freshen it up a bit. And there, sitting in a little round spot on the floor of the coop, was a perfect, speckled, little brown egg!!!!!!!
THEY DID IT!!!! WHOOO HOOO!!! My very first EGG! I'm pretty sure it was Betty Bloomer, she's the oldest by a month. I congratulated her heartily, took the egg and skipped giddily around and then proceeded to call my husband and my parents. Then I did a photo shoot with my first egg. I must say, it was very photogenic!
I'm not sure what I plan to do with this egg. Should I save the shell and mount it? How should I eat it? Oooh, I am still giddy about it! I raised protein in my backyard! One thing is for sure, I am going to eat it with the vegetables I grew myself, and drink it down with my fresh homemade apple juice from the apples in my yard. Ahhh, a sigh of satisfaction. 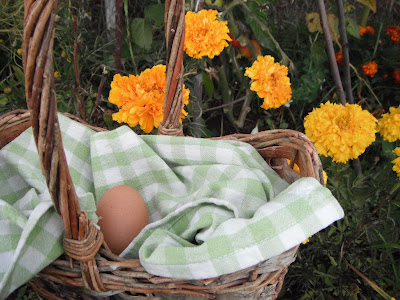 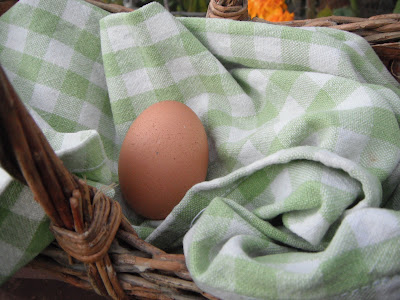 I'm so proud of you, Betty Bloomer! 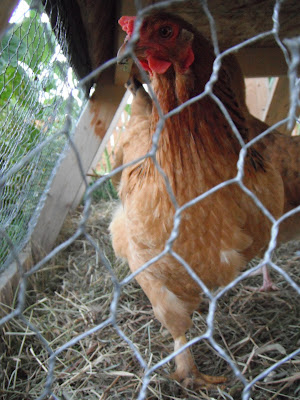 On another note, I wonder what the other two chickens were thinking when Betty laid that egg. They were crowded around her inside the coop. "Oh man, I think Betty's lost it!" "Someone call a doctor, Betty's losing her insides!" "What the *beep* is that Betty?!" "I hope that's not contagious!"
Posted by Kris at 4:16 PM No comments:

On an Autumn hike with my husband in the woods, I came across a fallen piece of Speckled Horsehair lichen and thought, "Gee, that looks like I could spin it!" I was giddy with all the possibilities of the future uses for lichen yarn. "Imagine a living sweater of the stuff, that just keeps growing!! I wonder if I am the only person who has ever thought of this?!" (Turns out I'm not. Many First Nations here used this lichen for clothing, footwear, and masks. I guess there are no new ideas under the sun.) So, using my trekking poles, I harvested a bit more and then made my husband carry it back in his backpack. Do you know the type of lichen I'm talking about? We used to call it Witch's Hair when we were kids, but this is actually a different species and darker in colour.
Anyways, I (read: he) brought the stuff back and I sorted through it, picking out bugs and pine needles and getting it ready to spin. It is pretty thick stuff to spin. I should have used a heavier drop spindle, but that's all I had, so too bad! It held the twist pretty well and I knit with it straight off the spindle. I just wanted to see what it would be like to knit with lichen. Come on, you know you are curious too! I knit up a little swatch, and it was pretty decent stuff, although it will snap if you are too forceful with it (which is why there is a hole in this swatch). I wonder what I will need to do to keep it alive? Or what it will be like when it dries out? Either way, I don't see a bright future for the stuff in sweater making. It's horribly scratchy. And when I introduced the idea of a living sweater to my mother, she responded, "Ew!"
Oh well. It was a fun experiment.
Speckled Horsehair Lichen in its "raw" form: 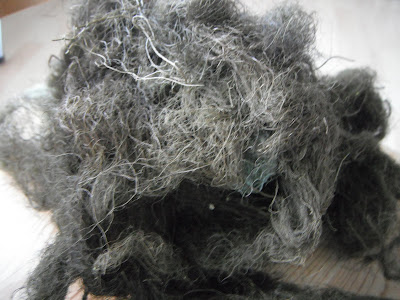 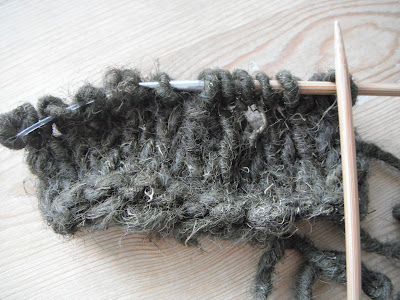 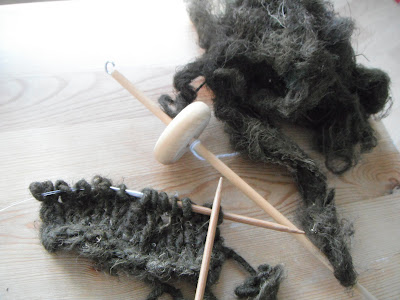 I wonder if there is a future for lichen pot-scrubbers?
Posted by Kris at 10:05 PM 2 comments:

Well, the bathroom is done now (more or less!). My parents painted the walls while they were up.
This is how the bathroom used to look before we bought the house: 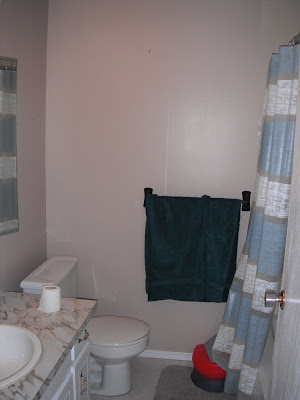 And now, the finished product: 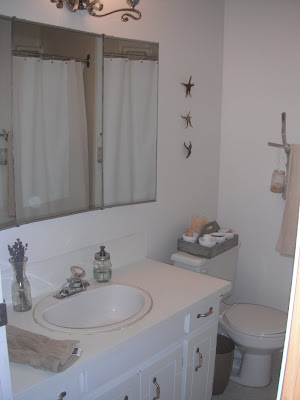 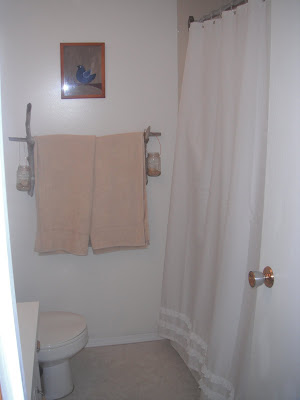 I love the starfish on the wall! I found those dried up on a beach in Haida Gwaii. I love how they sort of look like Divas posing. 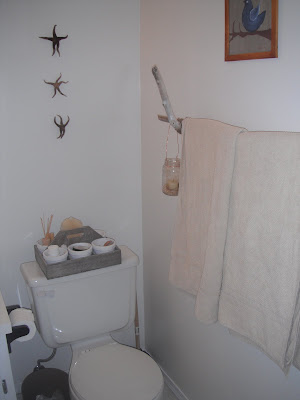 A Barn to Call my Own

Well, it's not really a barn, just a shed. But I can dream, can't I? Today I painted the door red and got it all jazzed up on the outside. It looks quite cute now! I ransacked and cleaned the inside a few months ago and I have been slowly getting my bunnies' living quarters up to snuff. I'll be all ready for them when they come in a couple of weeks. 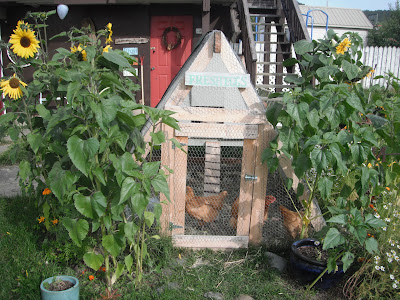 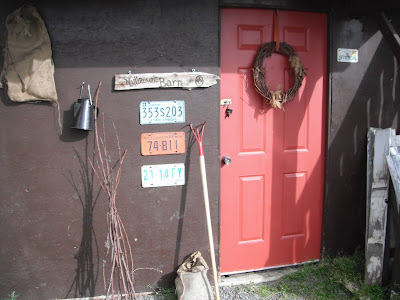 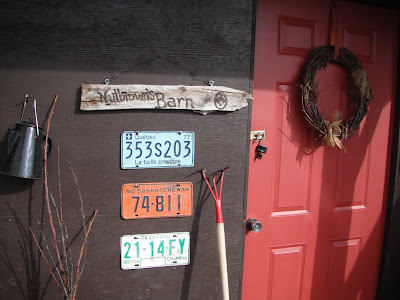 The smell of alfalfa in the "barn" is wonderful! 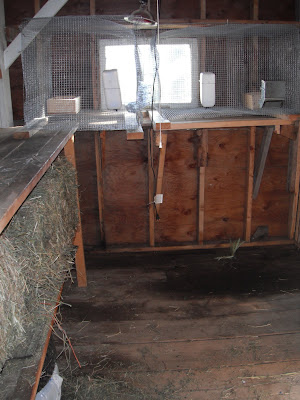 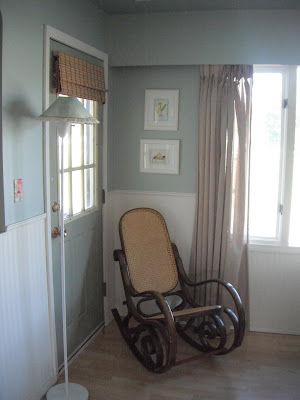 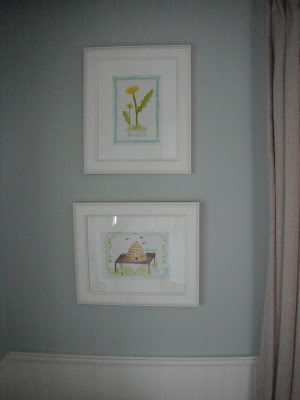 I hung up some artwork that my sister made today. I love the way it looks in my living room!
Posted by Kris at 2:44 PM 4 comments:

My parents came up for a brief visit and we had a wonderful time rambling around the Fort. They also helped me with a few projects around the house, like installing roof ventilation and painting my main bathroom. Thanks guys!
Funny story intermission: While we were up on the roof, installing the ventilation, I let the chickens roam around the backyard. Well, I sort of forgot about them until I heard two little girls walking down the street and one of them said "Why are there chickens there?" I looked down and sure enough, the three ladies were scratching in my neighbours front yard! They had escaped! I ran down the ladder to herd them up, just as my Mom, who noticed them from the living room window came down to help. I caught the first two pretty easily. But Honeychile' gave us a run for our money! She started running towards the vicious dog while my mother chased frantically behind. Then she (the chicken not my mom) ran onto the road where we were sure she would be struck by a car, and then into the park where I ran after her, lunging and diving. I finally managed to leap and catch her and return her to safety, while my dad and husband laughed from the roof. I think this just cemented my mother's fear and hatred of birds. But all's well that ends well!
Anyways! After the bathroom was painted, I knew I didn't want to hang up the old towel rack. I have been planning for some time now to make my own out of found wood pieces. So this morning, I whipped together this little piece out of driftwood I collected from our beach walks. It was so simple and easy to do and took about half an hour tops! 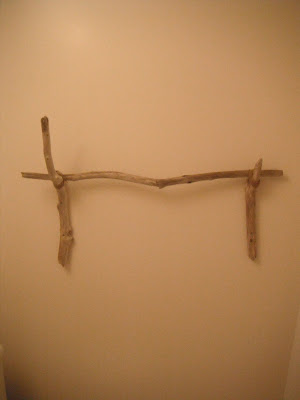 The rod is attached by screws but then I wound some twine around it for a decorative look. 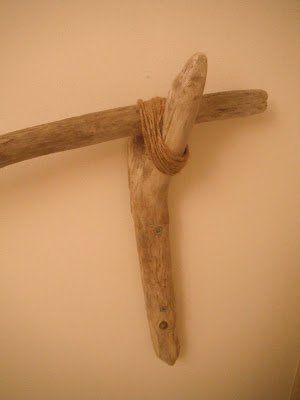 It is super sturdy and I think it looks great! 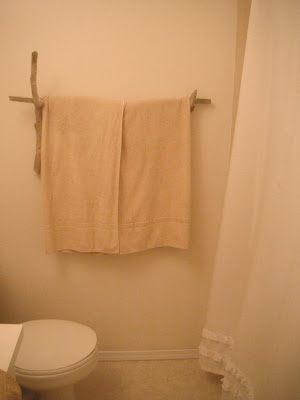 Check back later for some photos of the completed bathroom makeover!
Posted by Kris at 4:22 PM No comments: