I Love the Wild

Every weekend I spend my time heading out onto my trail, exploring tracks, setting up/retrieving my camera, and hoping for a wildlife encounter. January has been very kind to me so far!

Here are some Evening Grosbeaks, enjoying a snack of seeds in a neighbour's tree. I love seeing that pop of yellow colour. Something unexpected in the middle of winter! 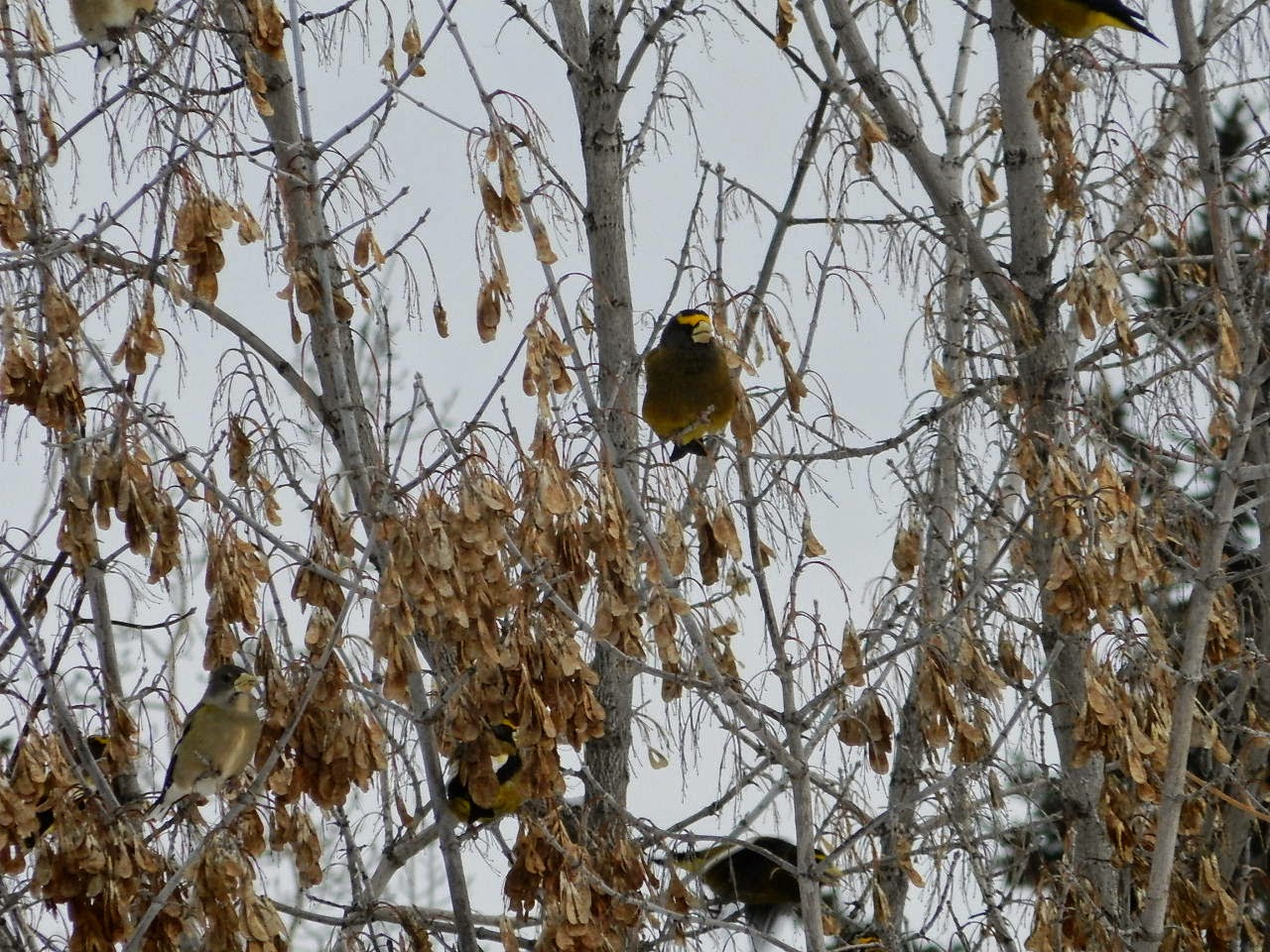 Sunrise. I love the view from our house. 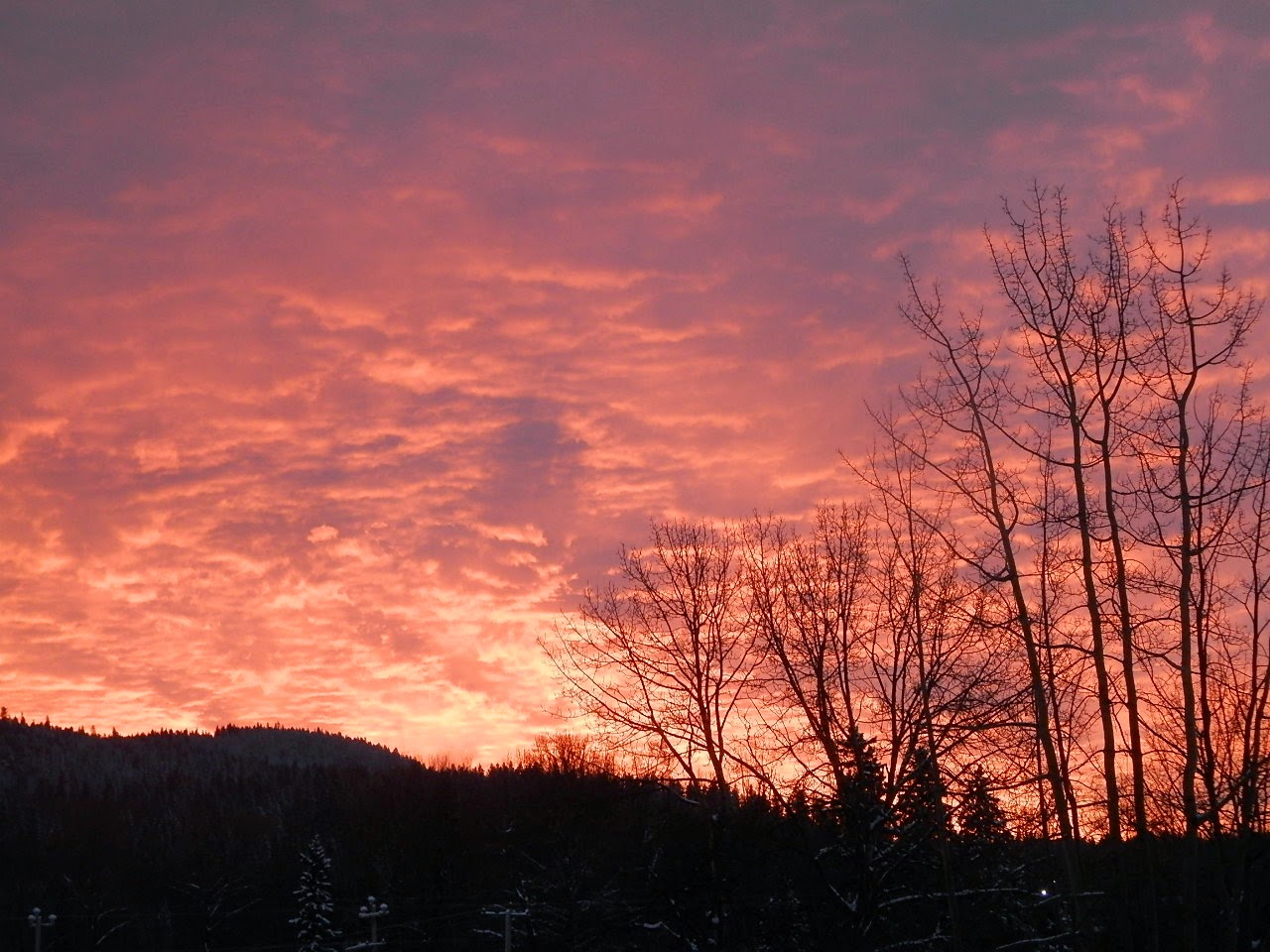 A red squirrel checking me out. 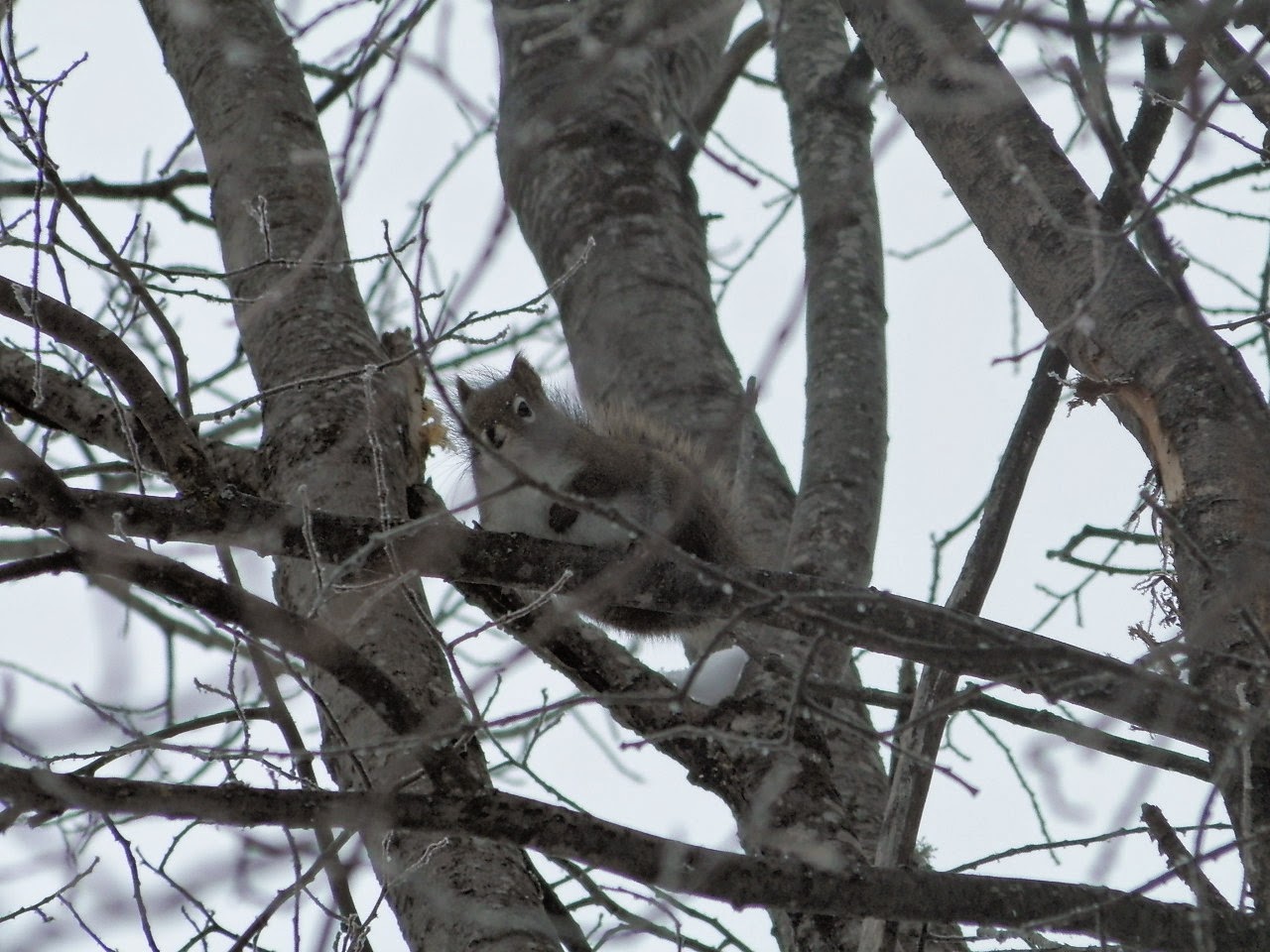 A softer, paler sunrise, yet still so beautiful! 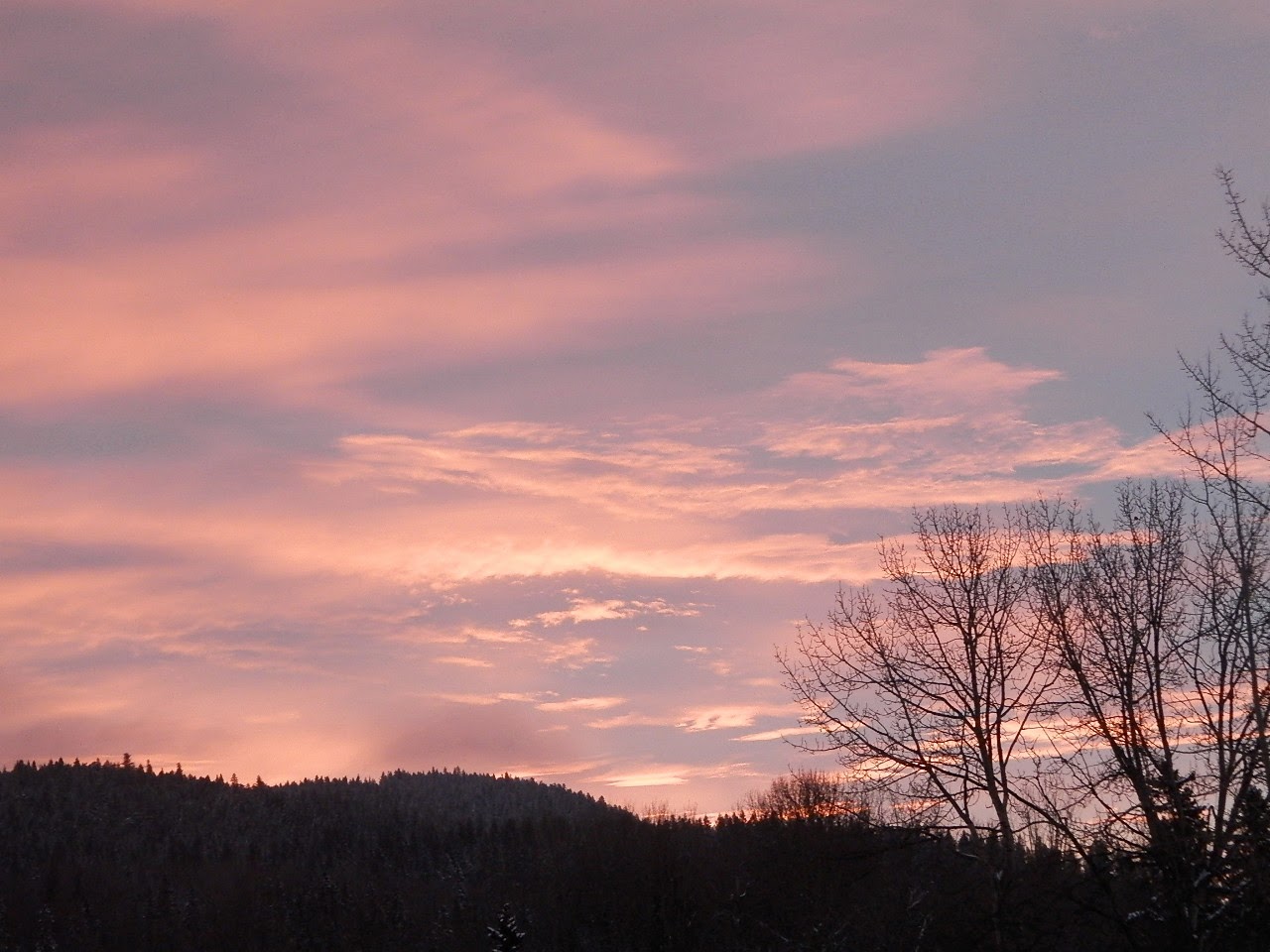 On Friday, I took the kids for a walk all around town and on some trails. We are in the middle of a warm spell right now and it was pouring rain when we came across two deer. The buck was resting on the ground and the doe was browsing nearby when we approached. The buck got to his feet, but didn't seem alarmed and continued browsing with the doe as we watched.

I love this picture of the doe's fur. You can see that it is wet. I can almost feel the fur. 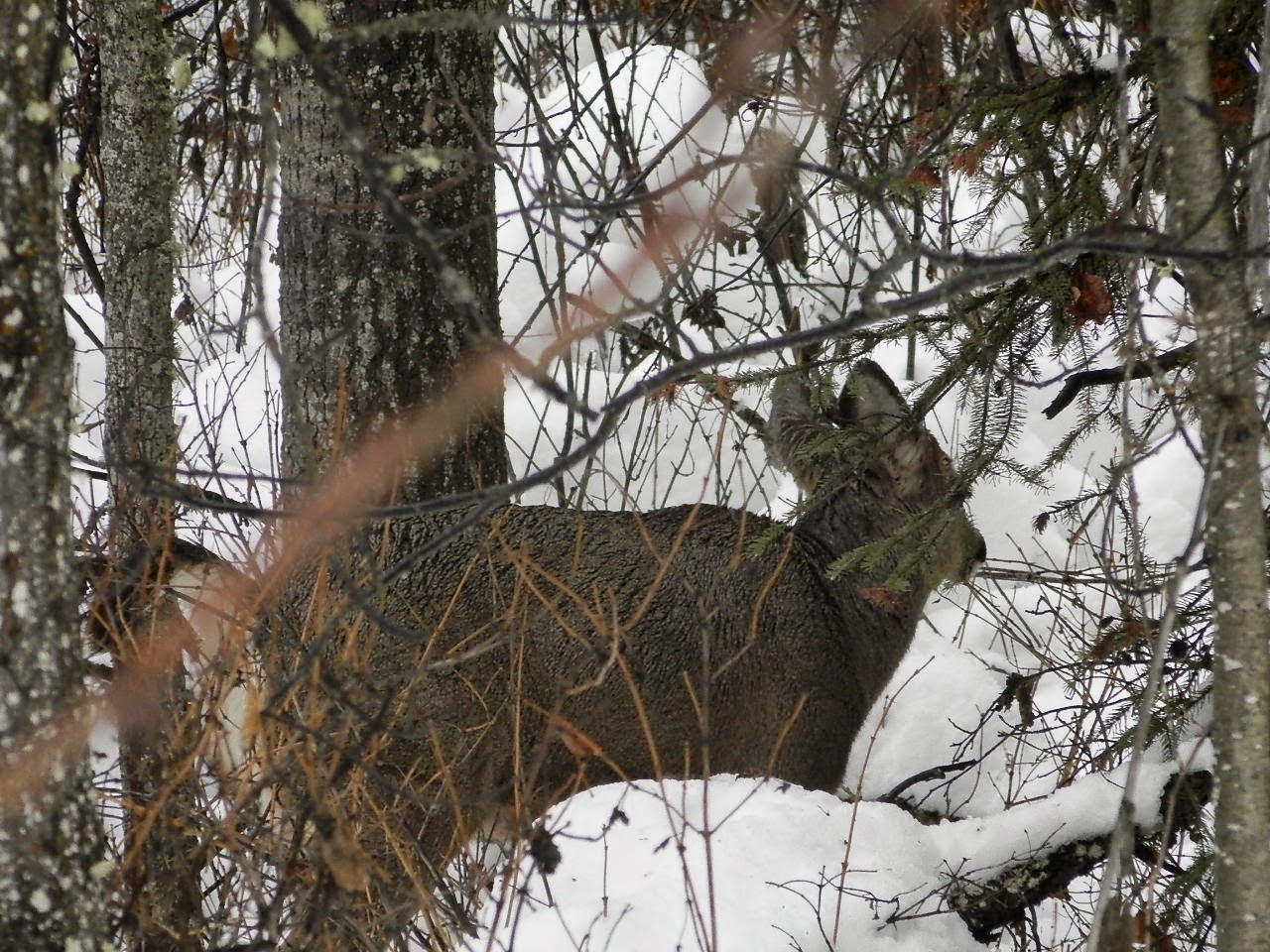 If you look closely, you can see the buck's antlers through the branches. 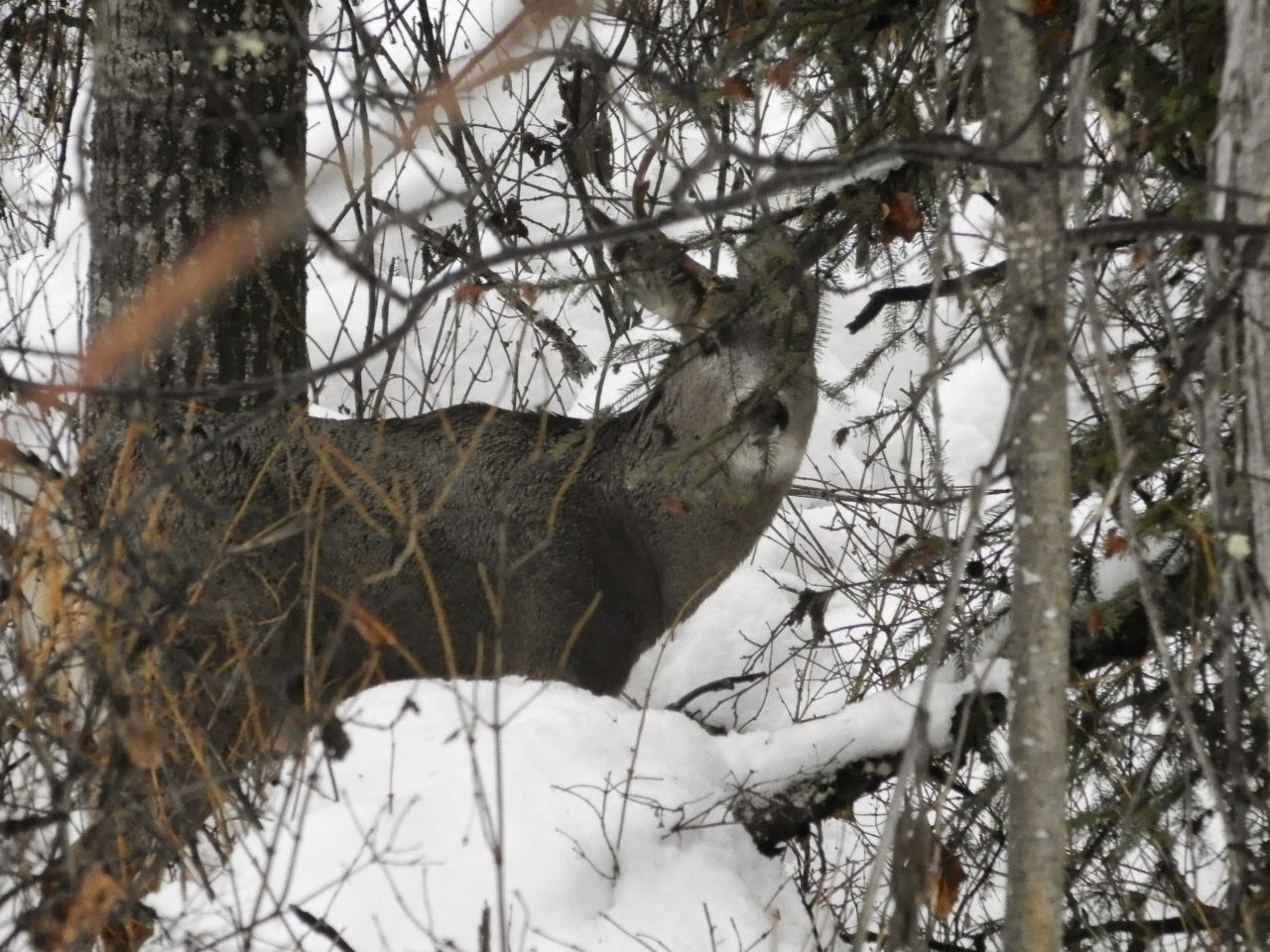 This raven was serenading me with all sorts of odd sounds before giving a couple of caws and flying away. 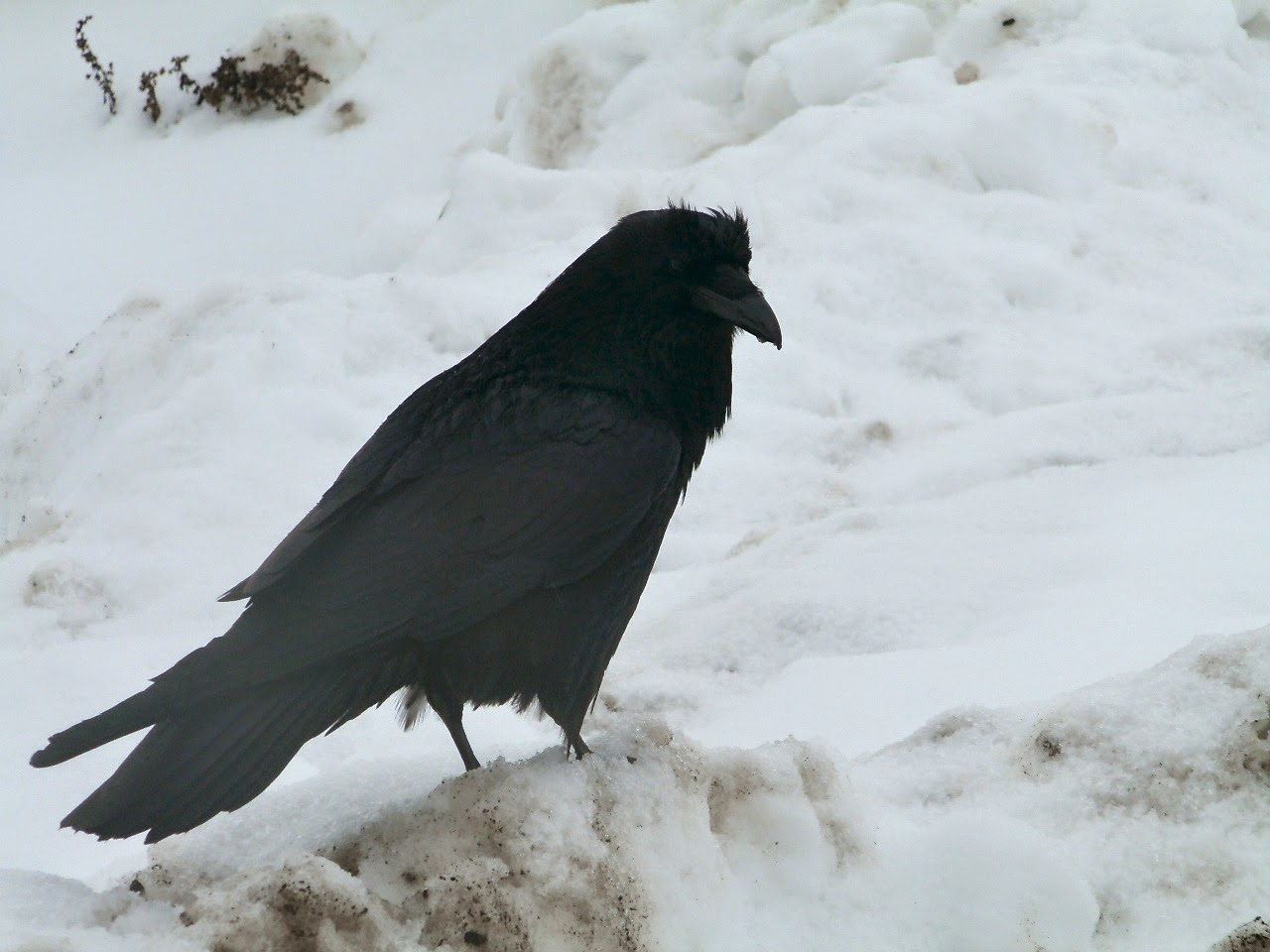 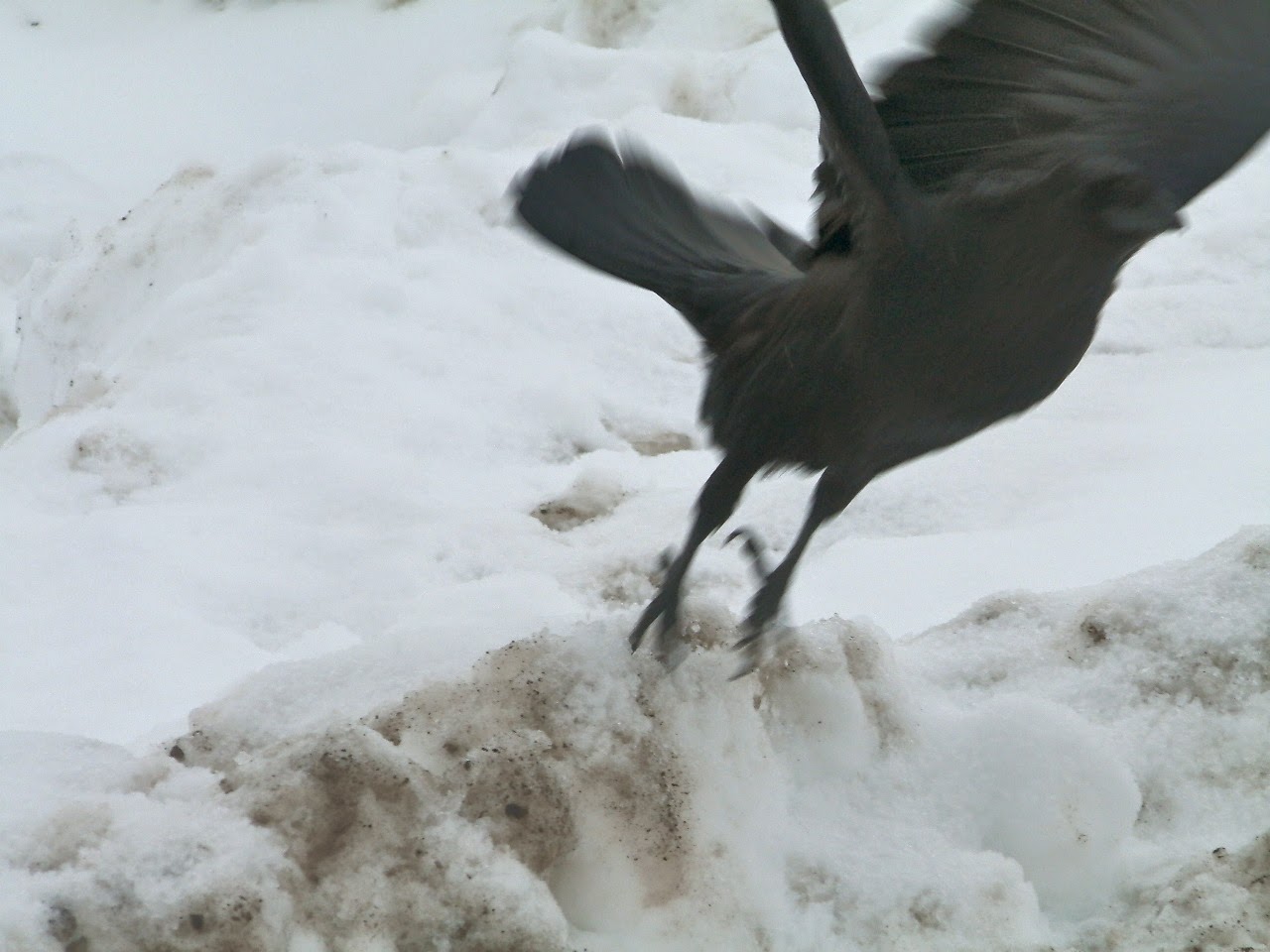 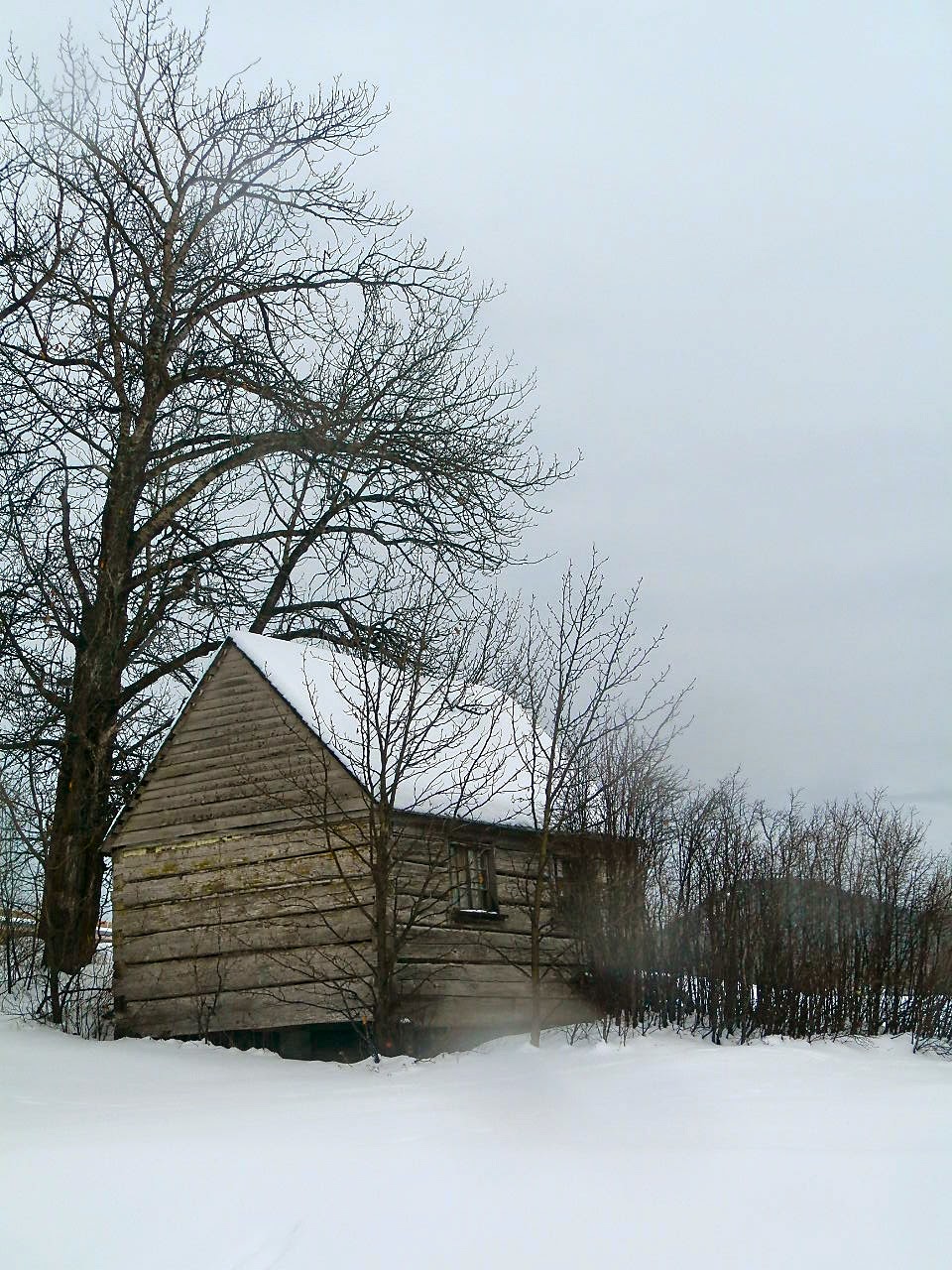 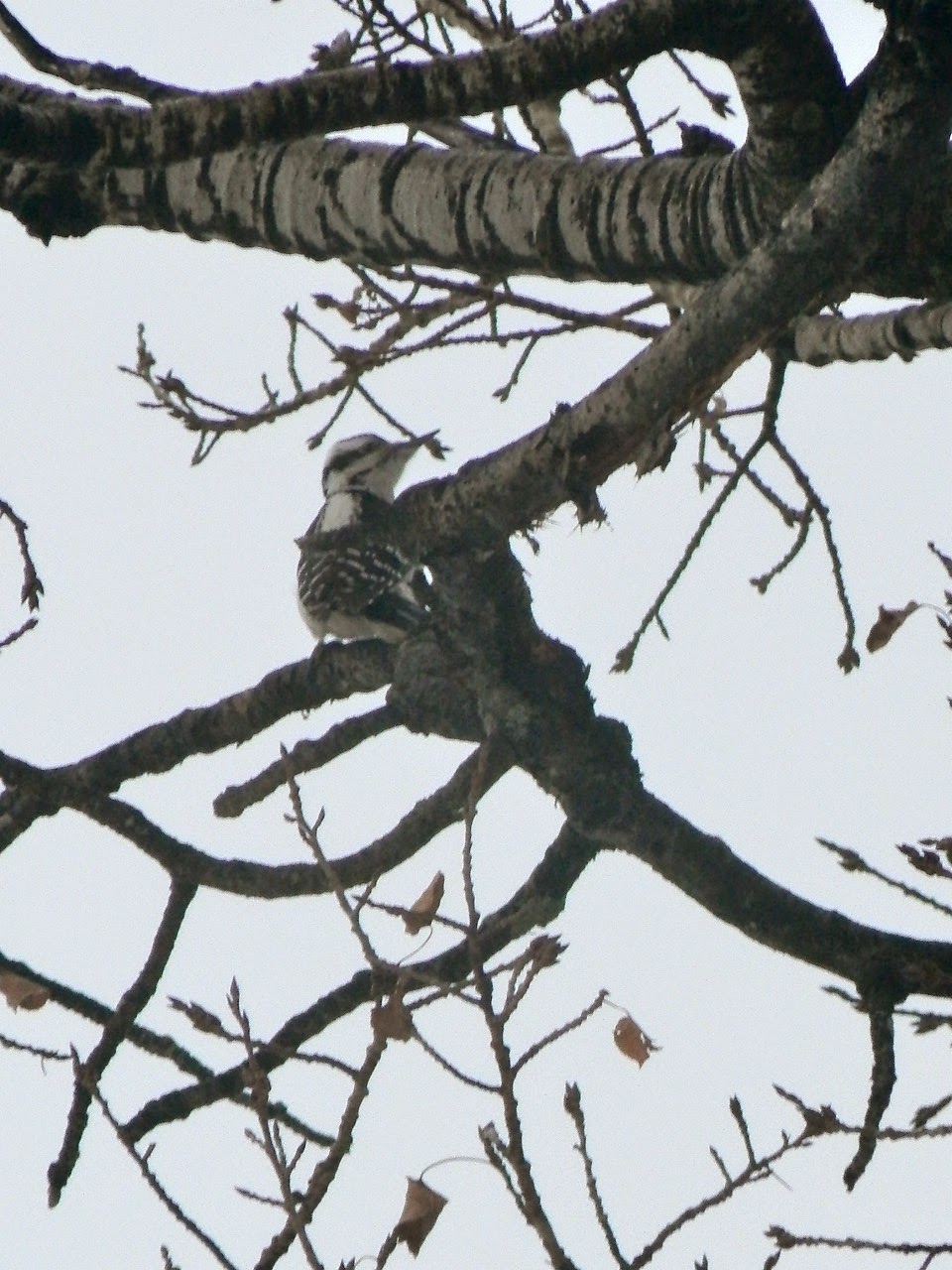 On Saturday, I bumped into my friend at the head of the trail. Every weekend morning I see him out in the bush, collecting firewood which he carts back to his nearby house in a wheelbarrow. He's been living here since '62. While his house is now surrounded by other houses, it used to be all in the bush with no roads. He's befriended a couple of squirrels that live near his house and as I headed up the trail that morning, he told me to sit down on the logs a little ways up. Sure enough, with the bribe of birdseed in my hand, a little red squirrel appeared and climbed up my leg. He took a look at the birdseed in my hand, turned up his nose, and scooted back down. He hopped to a nearby tree and scolded me harshly for not brining peanuts. 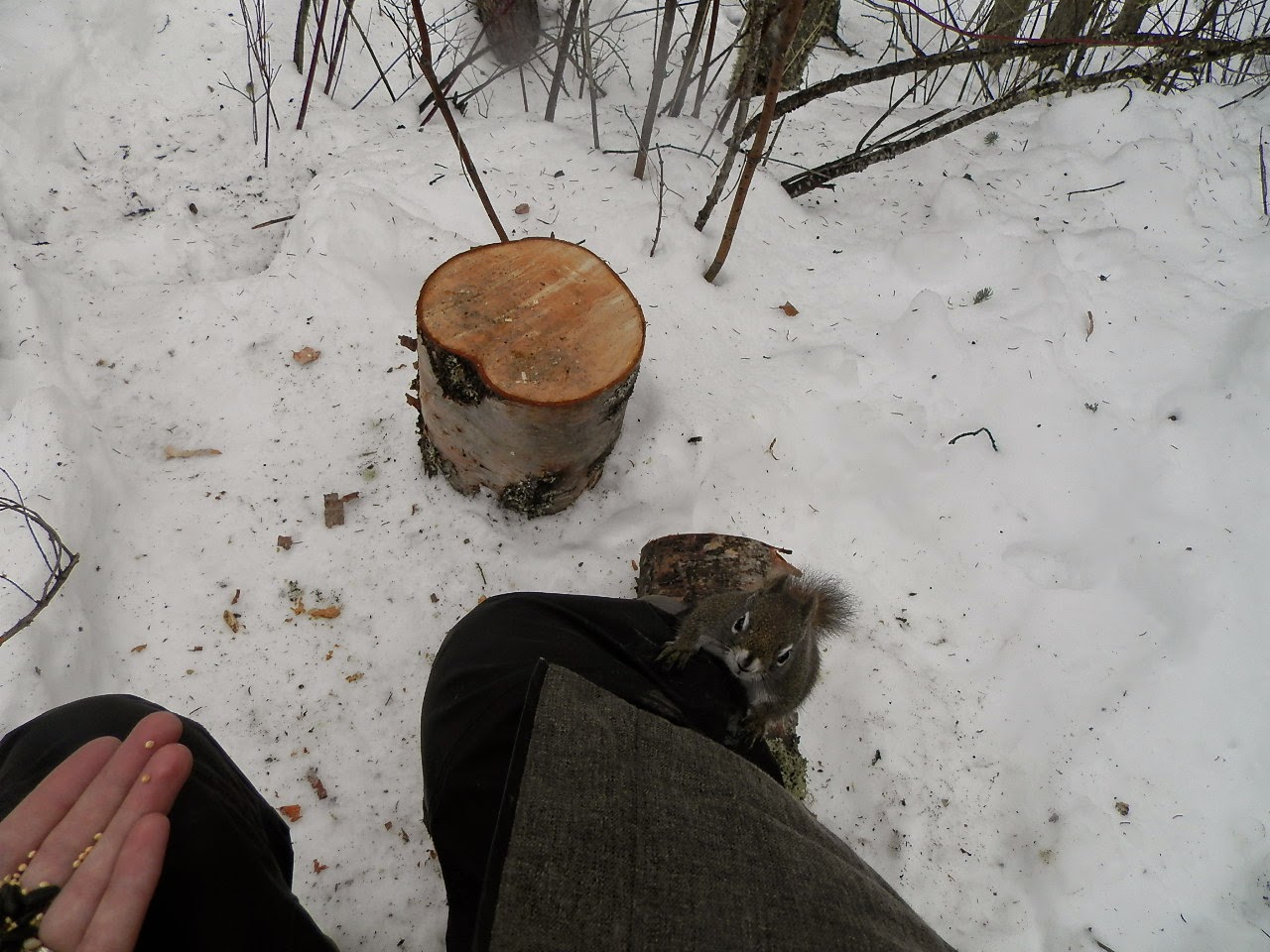 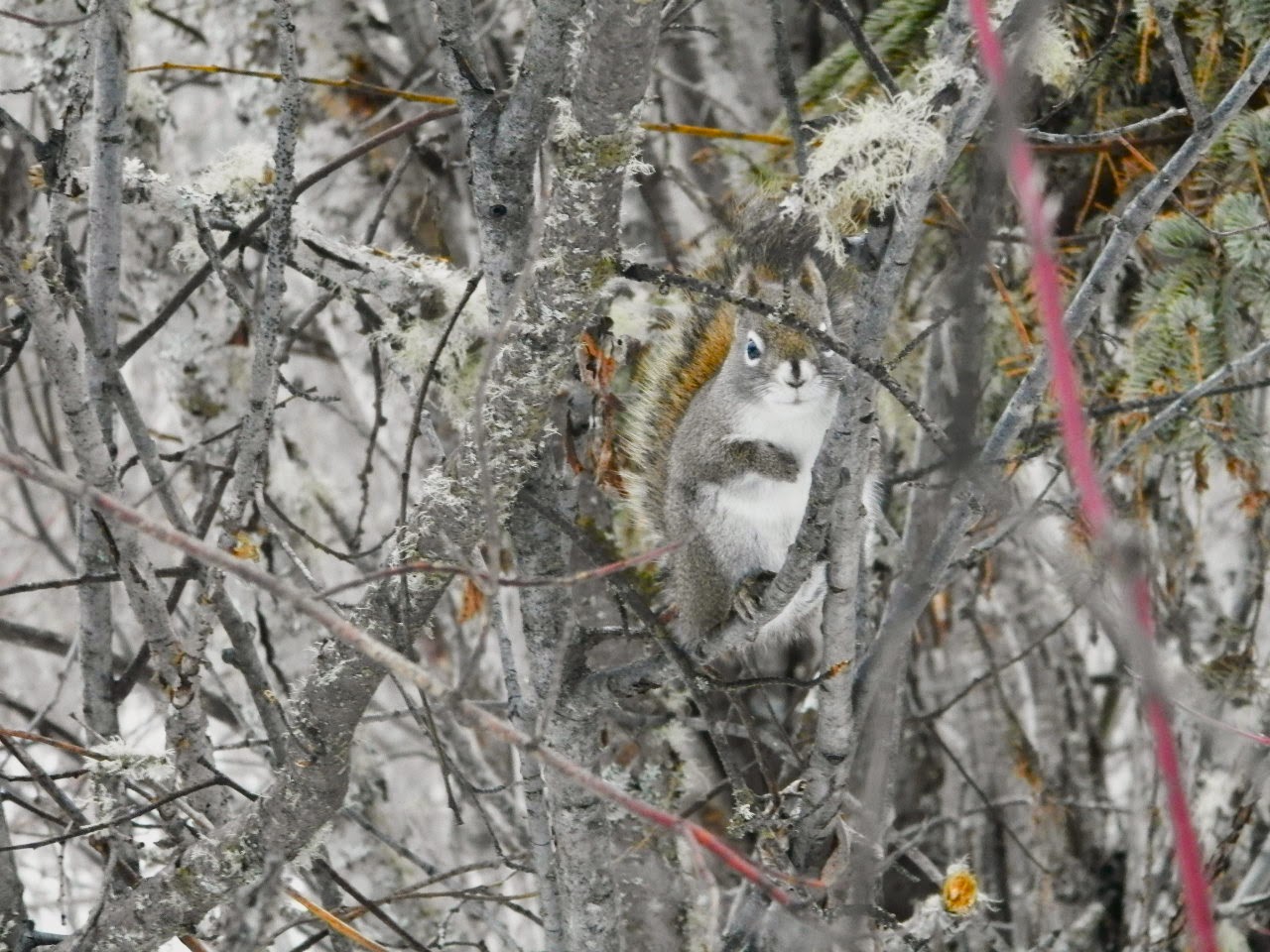 I headed further into the bush and eventually came to the start of the game trail where I have my wildlife camera setup. I paused at the top to listen and heard the crashing of big animals moving in a hurry. With heart pounding, I had very little time to figure out what was running up the hill towards me and hastily moved to the side of the trail as four deer came bounding up the slope. I was very relieved to see that they were deer, not a moose or a groggy bear. The deer came to about 10 feet from me before they realized I was standing there and hastily backed down a ways. Then they stood and watched me, judging whether or not they should make a break for it. I tried to look as least threatening as possible, but after a minute or two they "stotted" away (mule deer bounce on all four hooves at once), down the hill and then back up a ways from me. From this safer vantage point they stopped and watched me and I watched them, taking a few pictures. I managed to film a bit of the encounter. I find it funny that this happened to me the day after I watched this video. I definitely had it on my mind when those deer came charging up the hill. 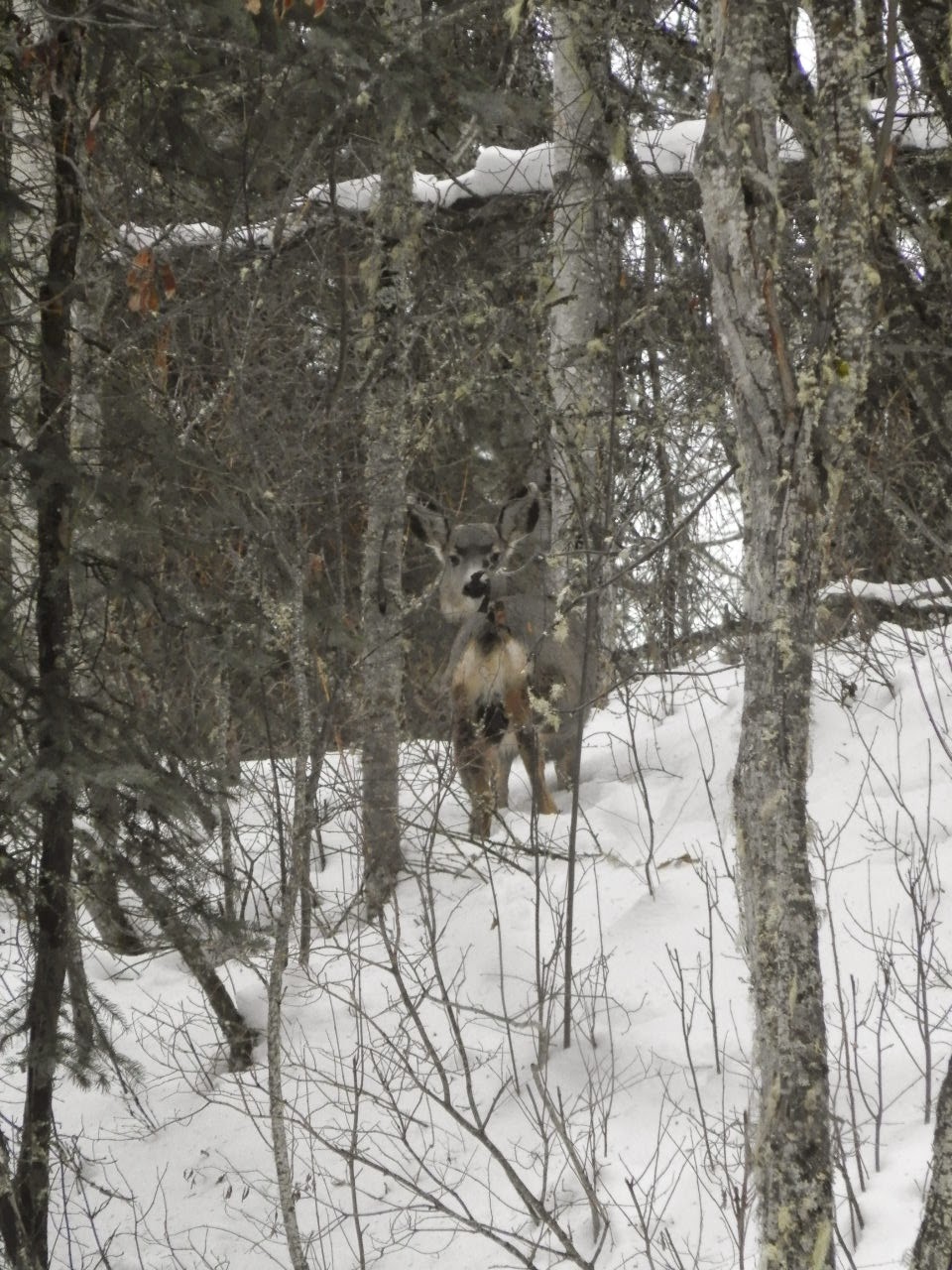 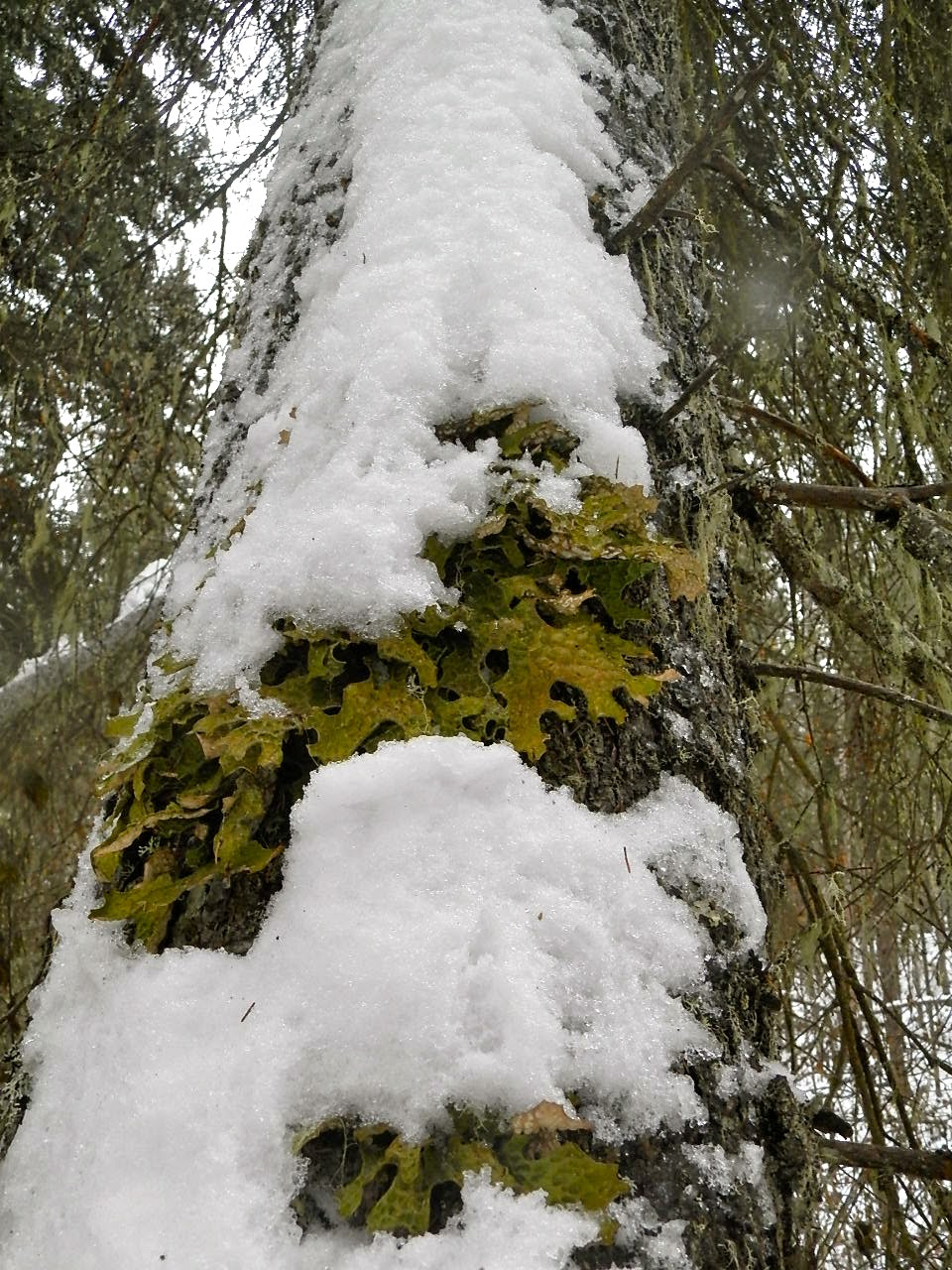 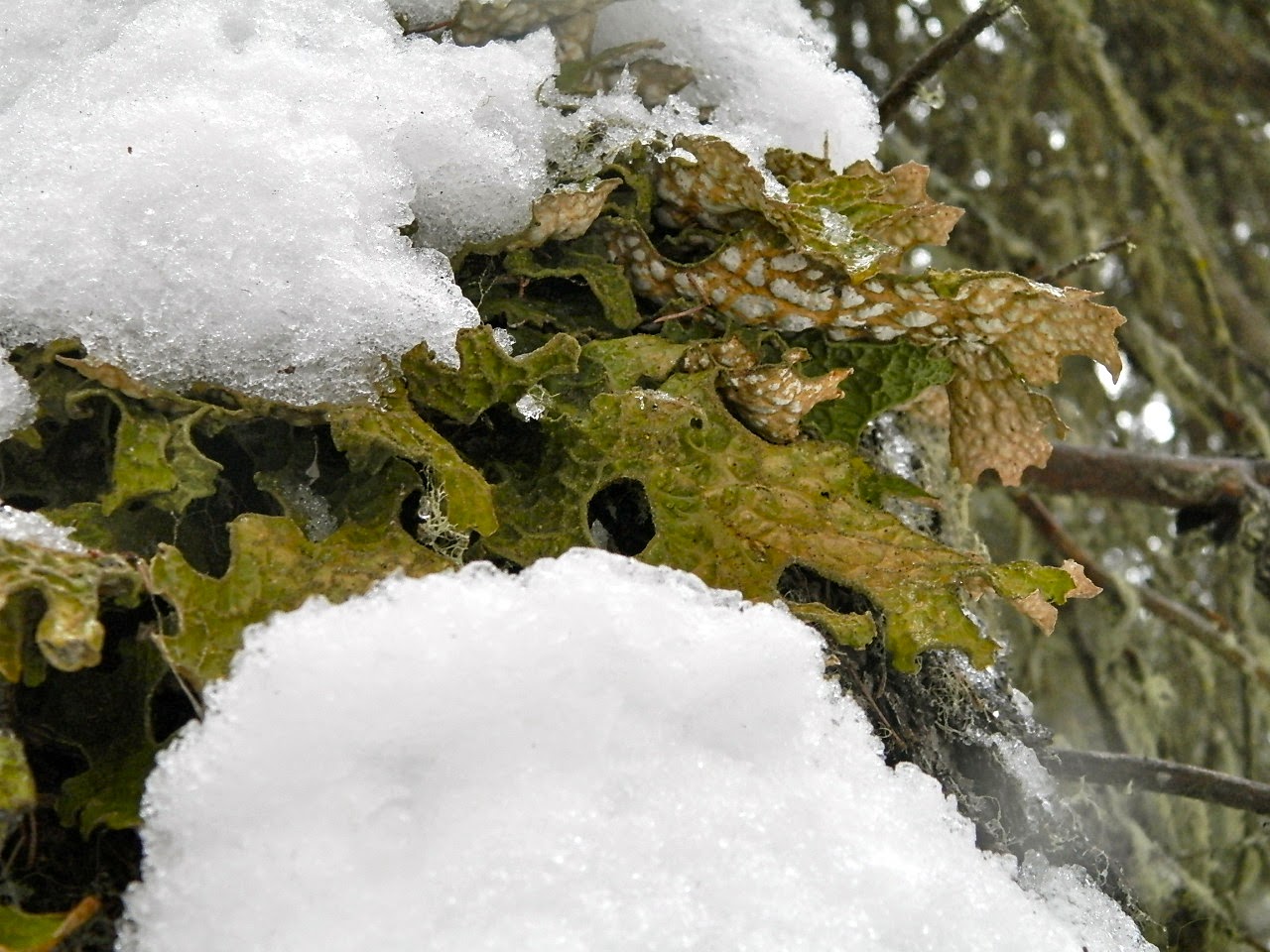 This morning, I went to see if I could find any new sign of the beavers. After weeks with no sign, I was beginning to think they had left, but the thaw must have brought them back out to work. I found new trees cut, new tracks, and a new hole in the ice that the beavers have been dragging trees into. 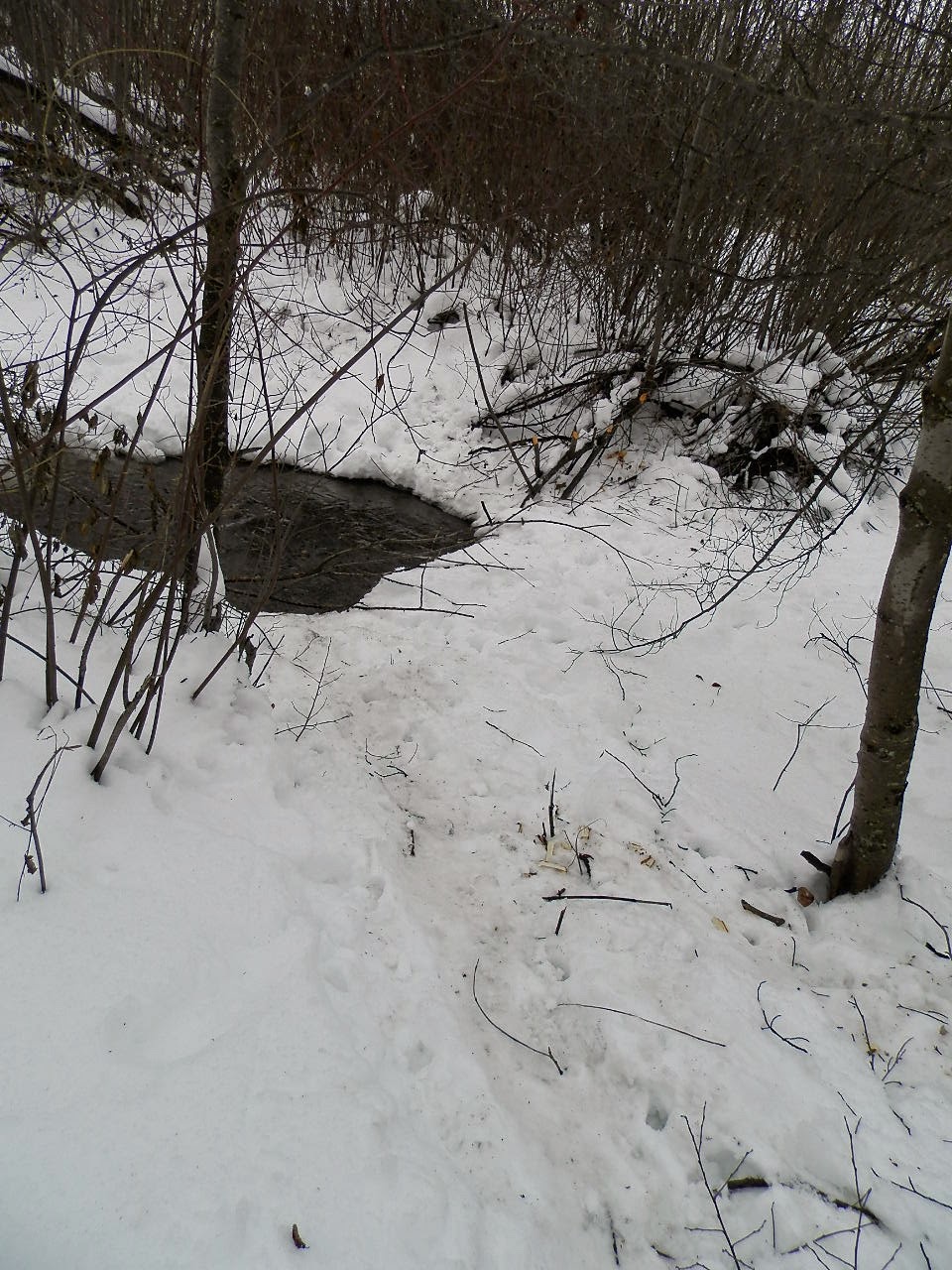 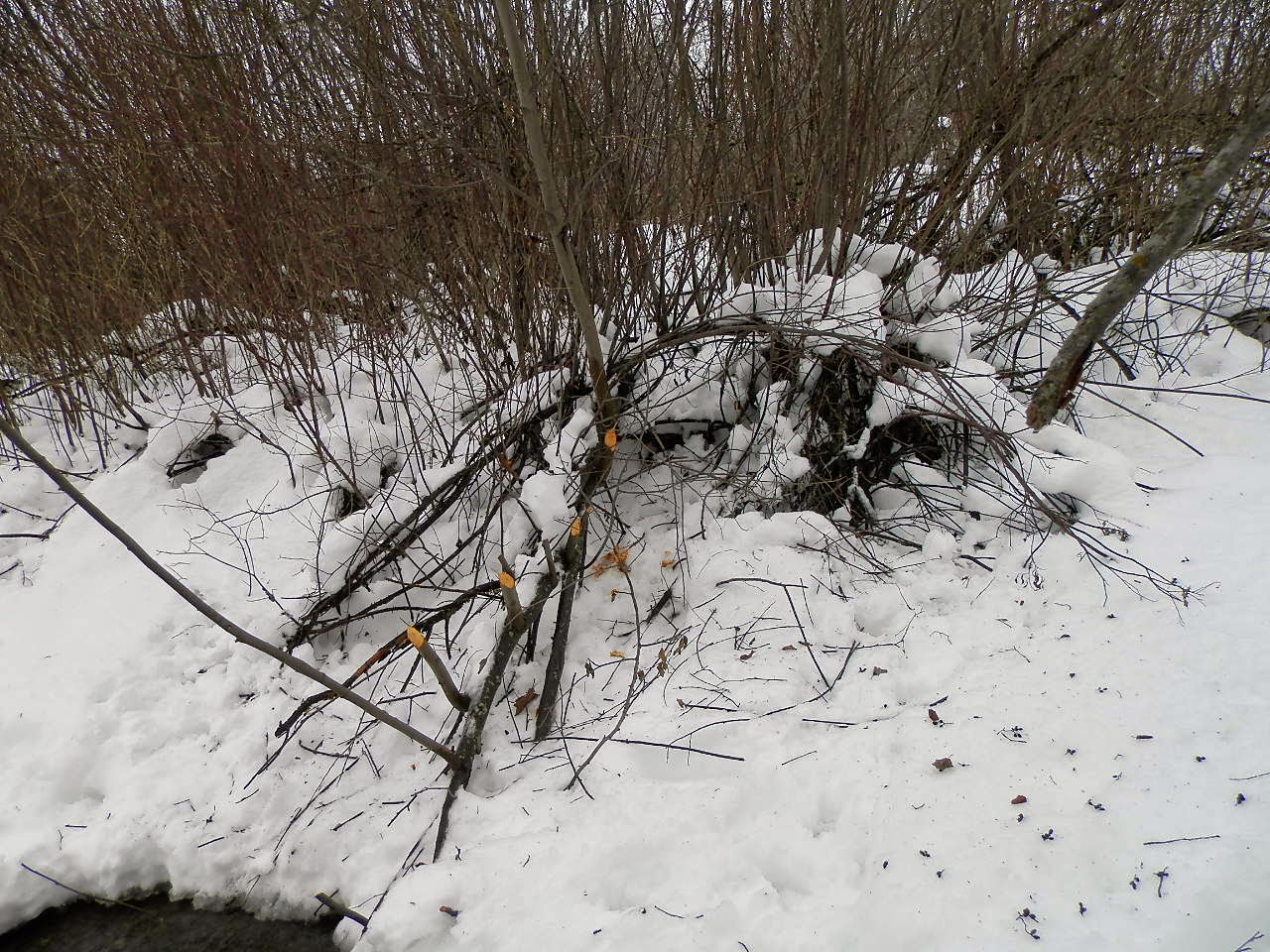 The water is scarcely a foot deep in this area, so I am impressed that the beavers can fit under the ice with trees. But they clearly do, as there are no other tracks once they get to this spot. Although, it looks like not all the trees fit under the ice... 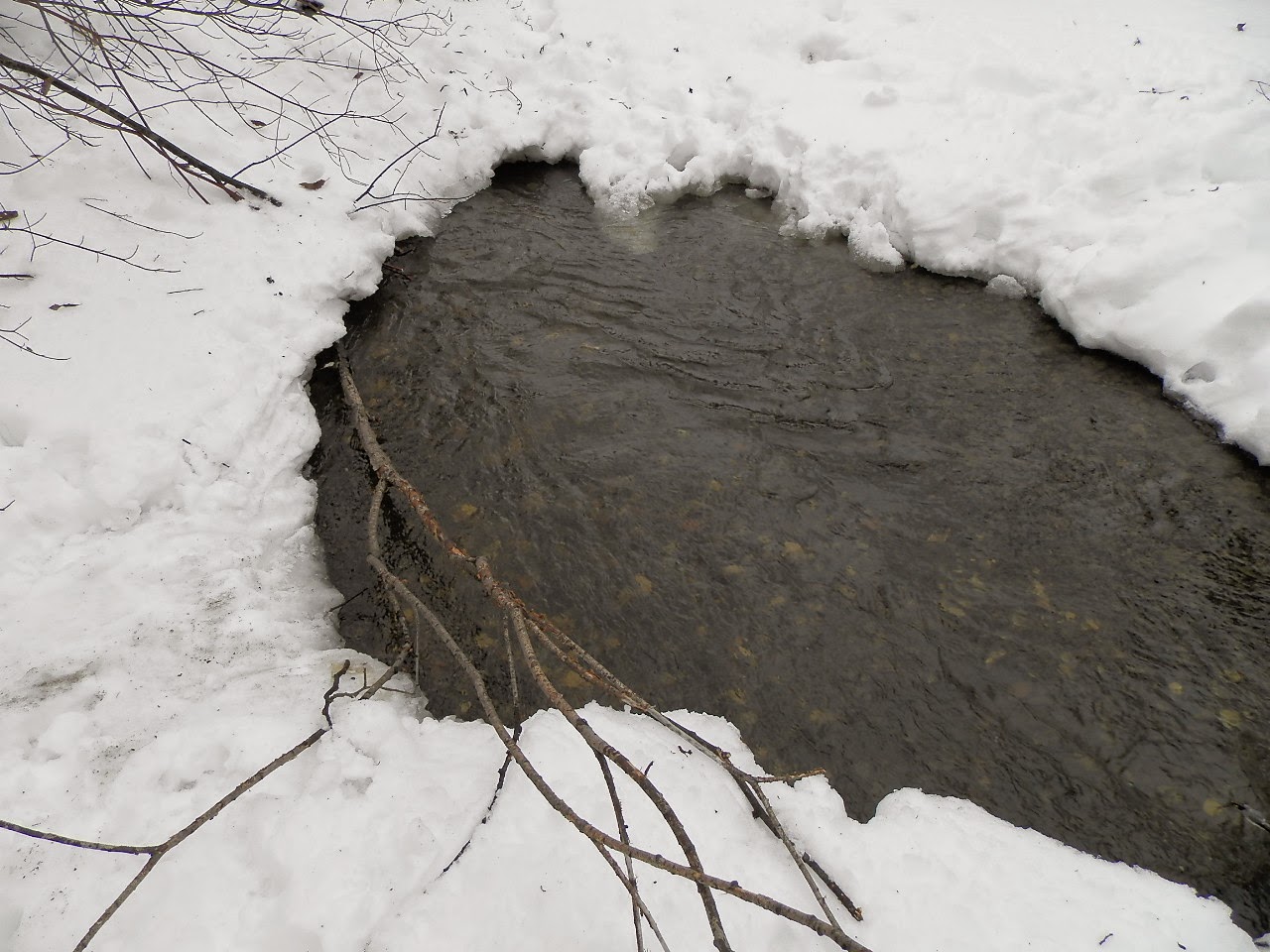 And as I walked in the woods this morning, I was pleased to find a little creek, with open water. Although I am not happy about the thaw we are having right now, it was nice to hear the trickle of water and to see the reflection of the forest on the water. 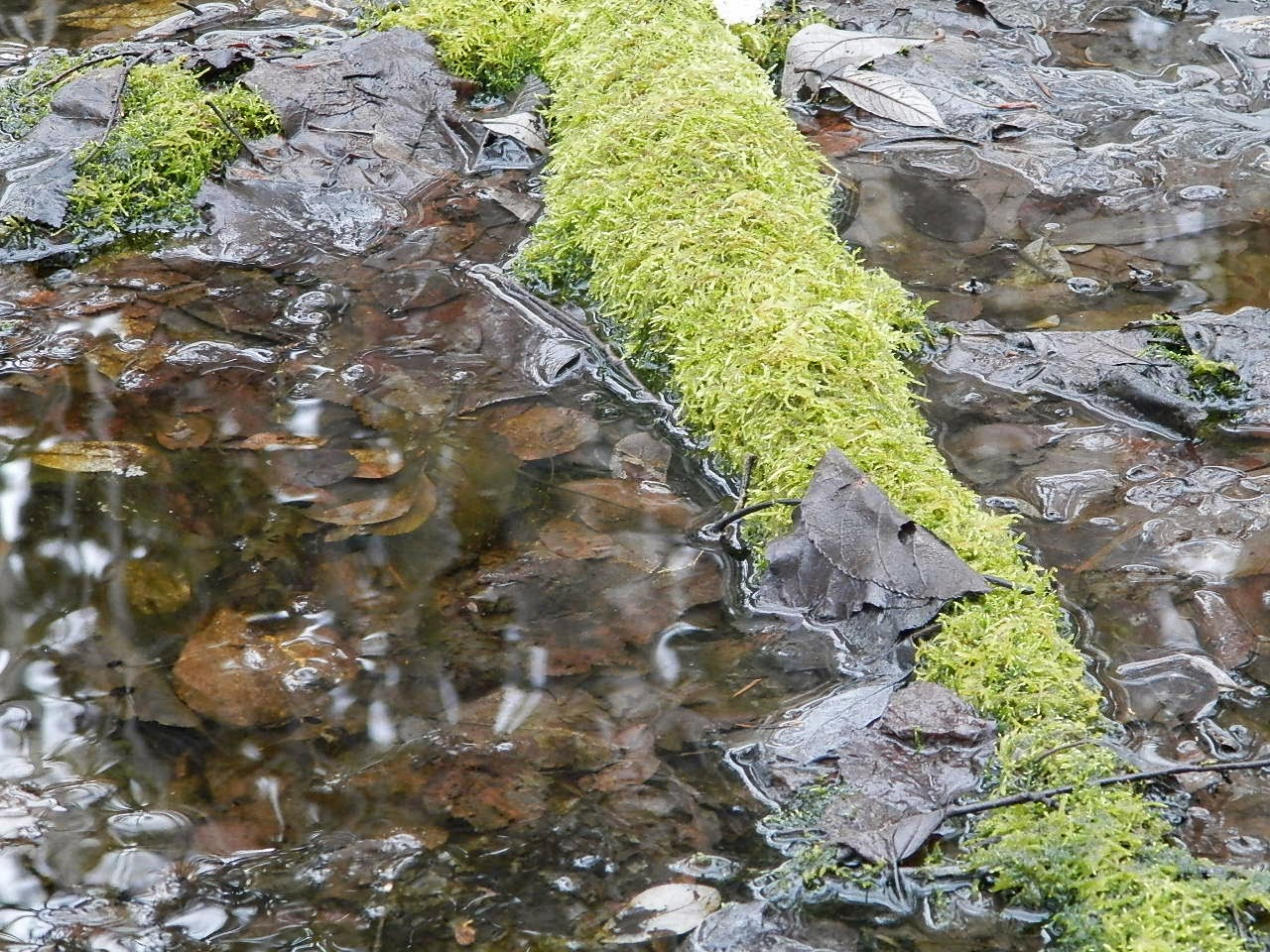 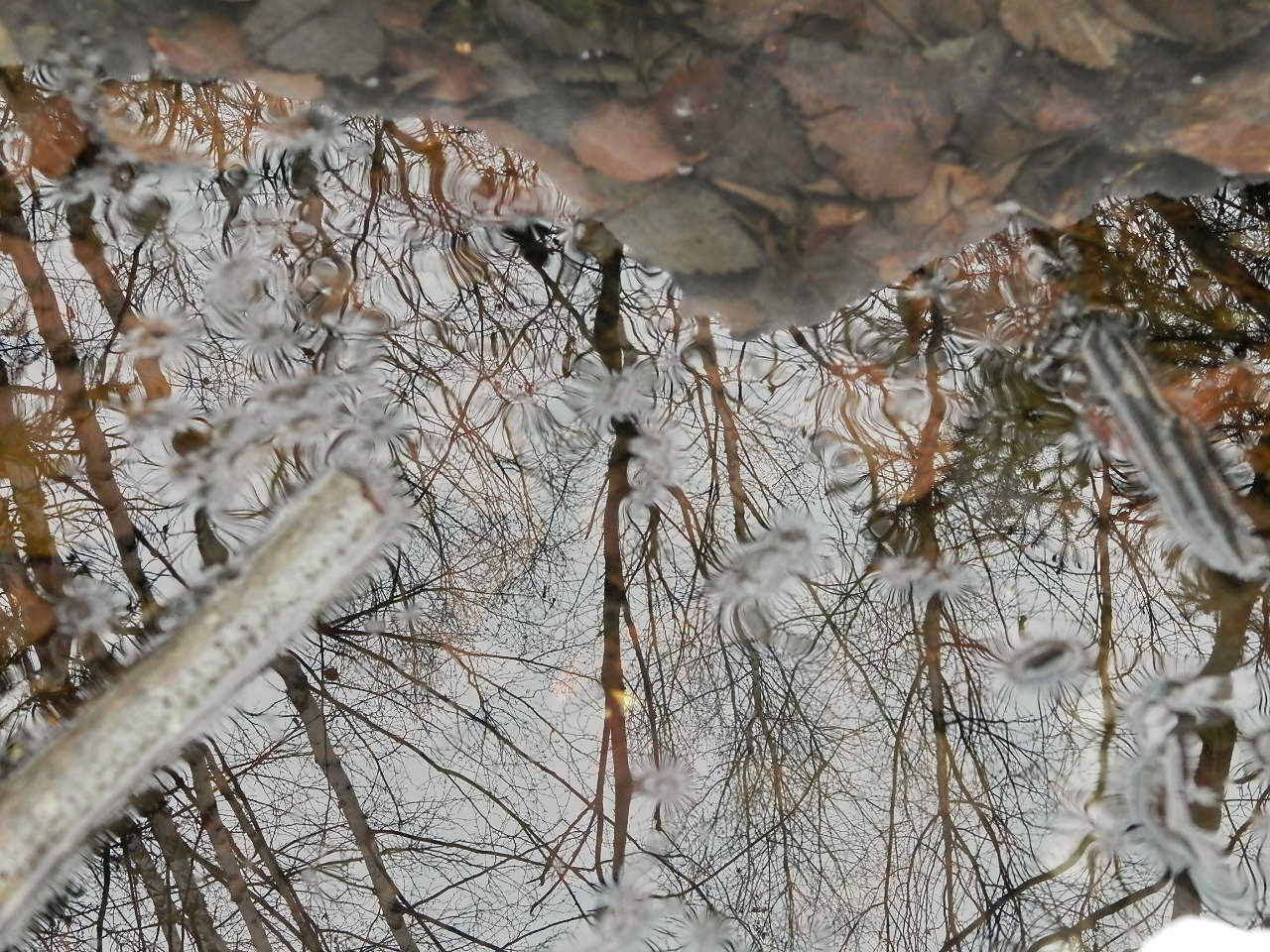 Mmmmm, I love being outside!
Posted by Kris at 8:03 PM No comments:

A stag passed by the trail at night. Two antlers on this one :)

A little marten made a brief appearance to the left of the screen. I'm hoping to capture him on video again this week.

These deer paused on this spot for awhile and I got a couple of videos of them. A minute later, Ol' one antler joins them.

One Antler Stag and Doe

I seem to have found a good spot for my wildlife camera. In one week I had 18 new videos, mostly of deer. Check out this buck with only one antler. He passed by a couple of times.

The Old and The New

Well, New Years has had me thinking a lot lately about the past year and what I want for this year. 2014 has been a good year for me. Besides the fact that I had my daughter (which alone would make any year top notch), I've also been challenging myself for the better. For example, after a good friend moved away from the Fort, I realized that I was going to have to put myself out there to make friends. This has always been hard for me. I've always left the first move up to the other person (and not just the first move! I think I pretty much make them arrange every get together!). But no longer! I started calling people and have made some wonderful friendships this year.
I've also challenged myself to be more active. Since Cedar was 4 weeks old, I've been getting out mountain biking and running, and now that the weather is colder, I've been doing a workout every morning and hiking/animal tracking on weekends. Being active helps me to feel strong and is such a mood booster! I've been trying to heal up some injuries from being pregnant and I can feel my body slowing knitting itself back together.
I've also been doing a lot of research and learning about the local wildlife around here. Throughout my life, I've gone from one obsession to the next (eg: the Amazon Rainforest and sloths, tornadoes, Ireland, Medieval times, etc) learning as much about the topic as I can. And for me right now, that topic is the wildlife of the North. My children often both nap at the same time in the afternoons, leaving me with some time on my hands. I use those moments during naptime to research, and my weekends to hike, observe, track animals, and hope for an encounter. I'm always happy when I am learning about what I love!
So this year, I have often daily observed how happy and content I am. I don't know if I have ever been happier! I love my family and where I am living. I love that I get to have time with friends and time on my own to be outside in the forest. I love that I get to learn about the wild animals and the land here. I'm just happy :)
I hope that 2015 follows in the footsteps of 2014!
That being said, I would like to set myself a few goals for this year, for things I want to accomplish (mostly gardening related).
1) I would like to plant and grow more wheat this year.
I want to try and grow it much thicker on 100sq feet so I can get a bigger yield. 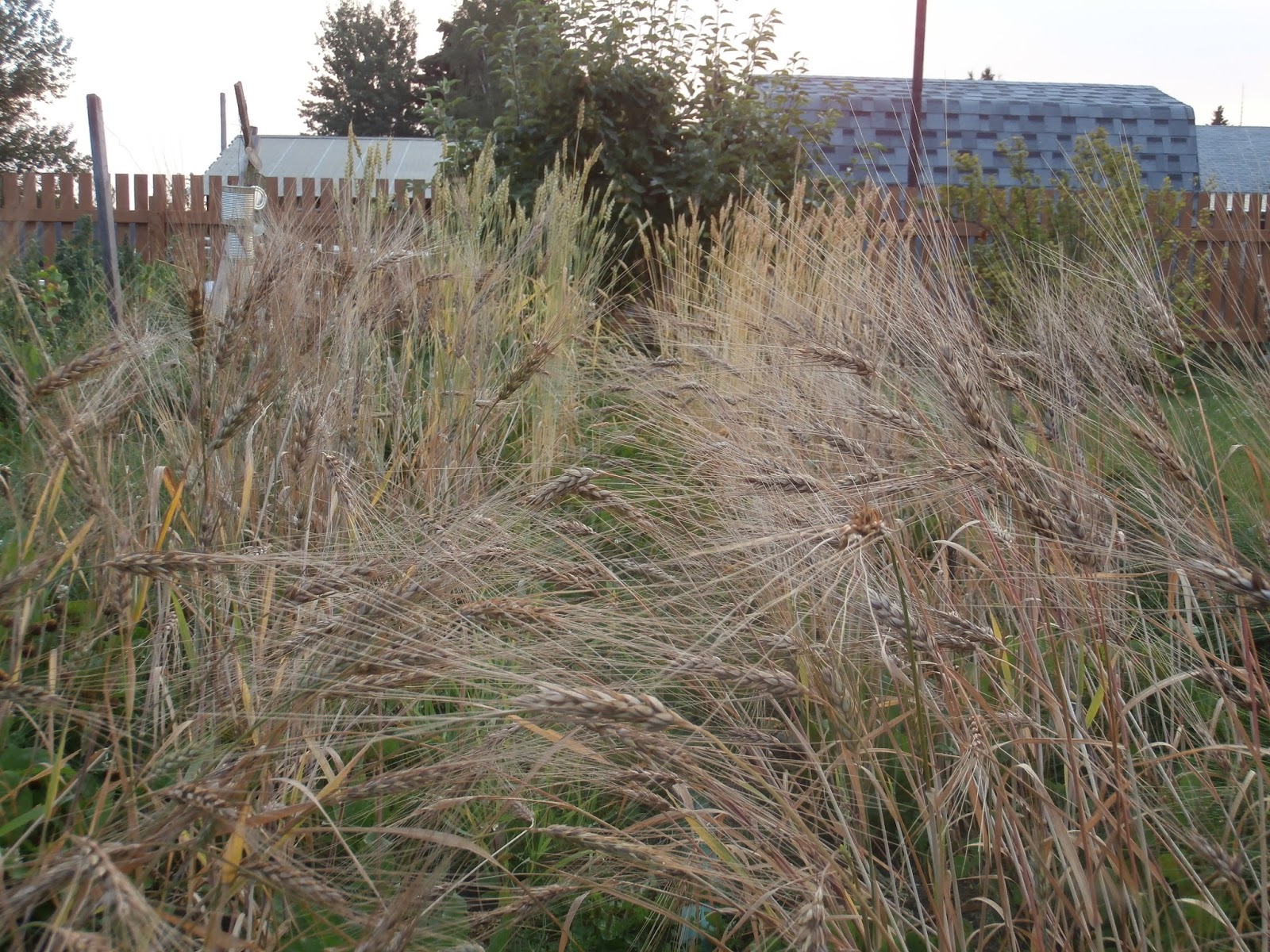 2) I want to put down mulch around all the raised beds and try to keep up with weeding.
The thistles grow so thick around the raised beds that if I put down some road cloth and mulch, I might be able to keep them under control. 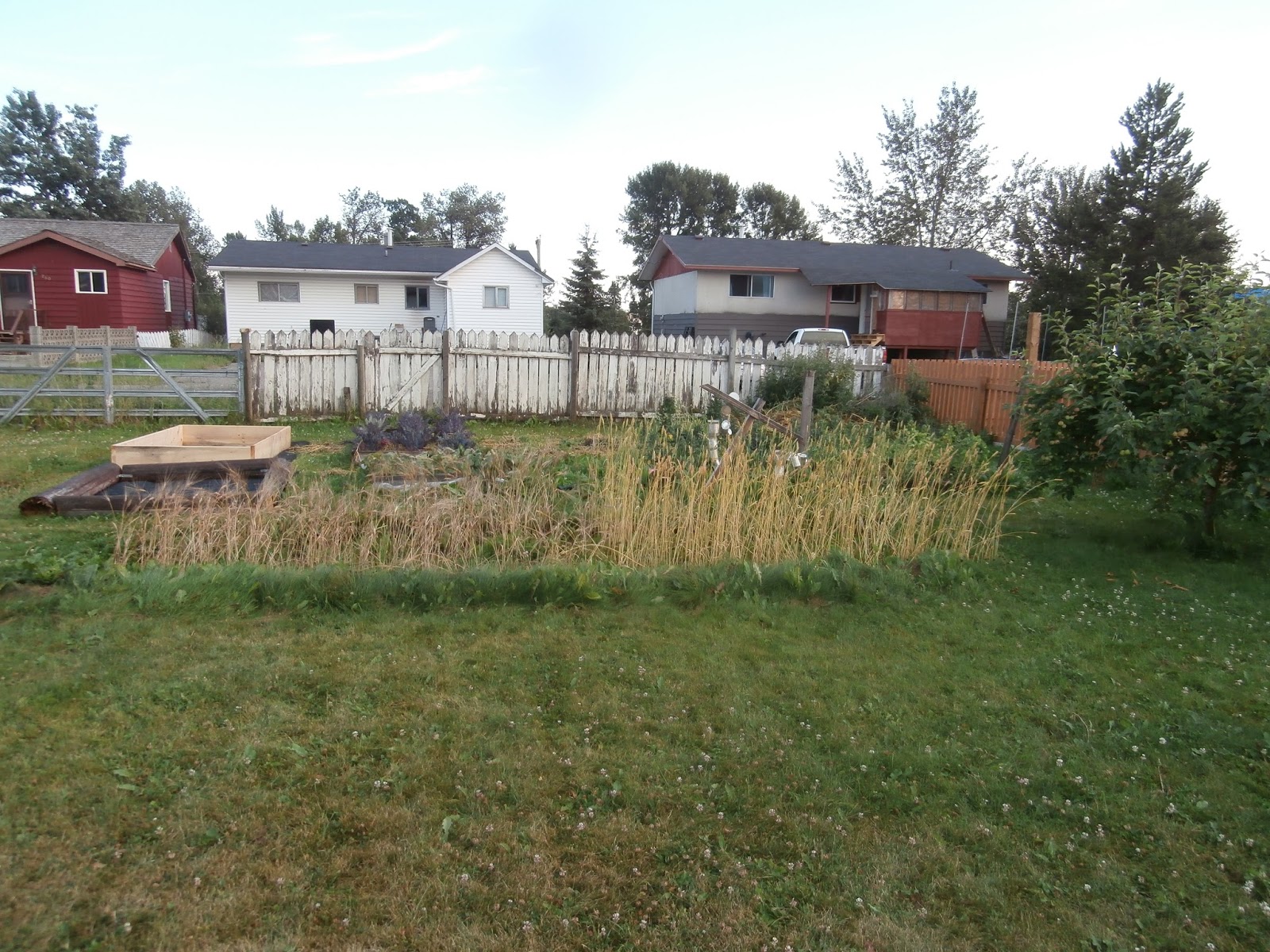 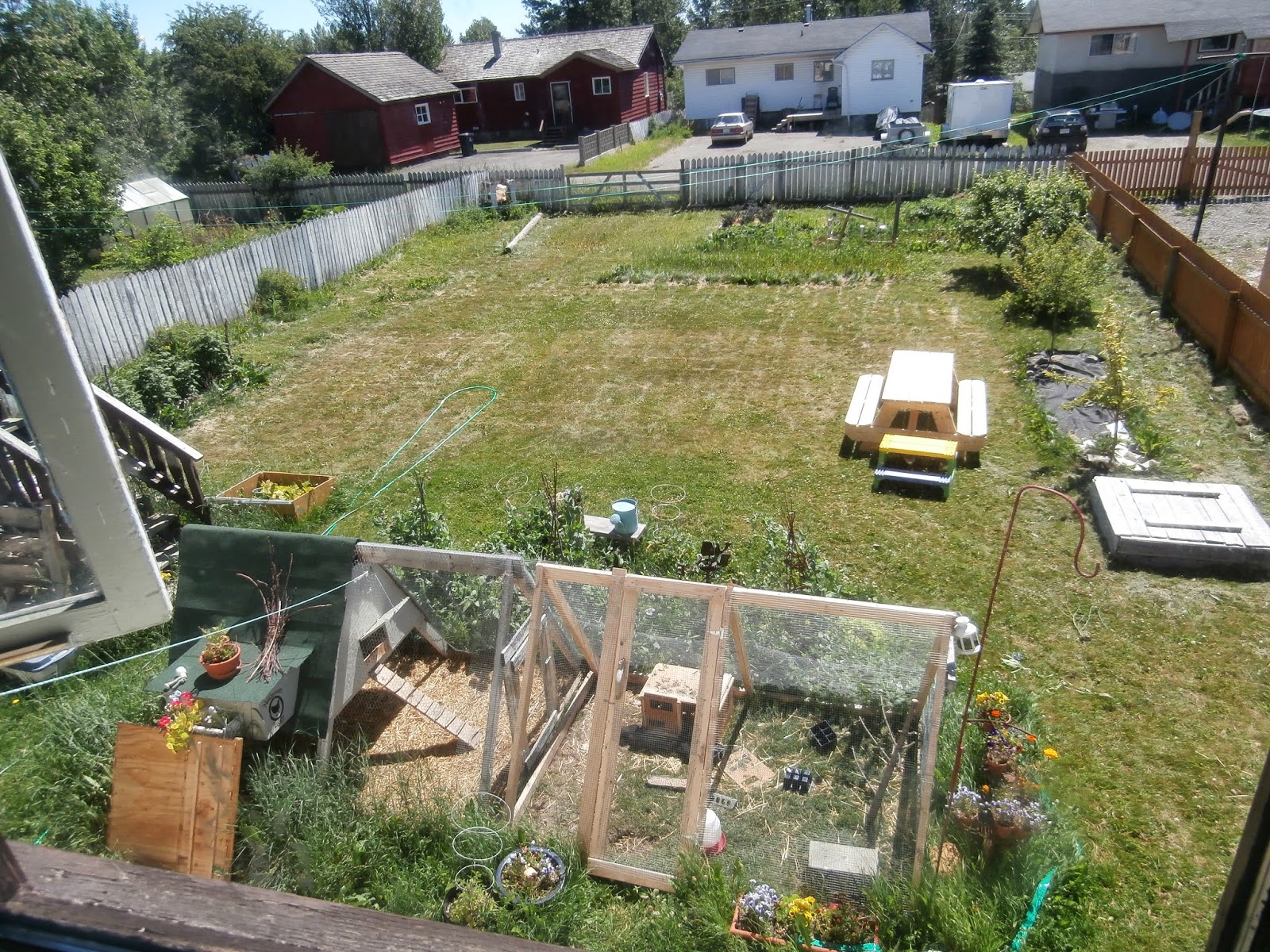 (See that fabric down between the trees to the right of the photo? That's the location.)

4) Hatch more chicks
Now that we are down to two chickens, we could definitely use some more eggs. Spring hatch! 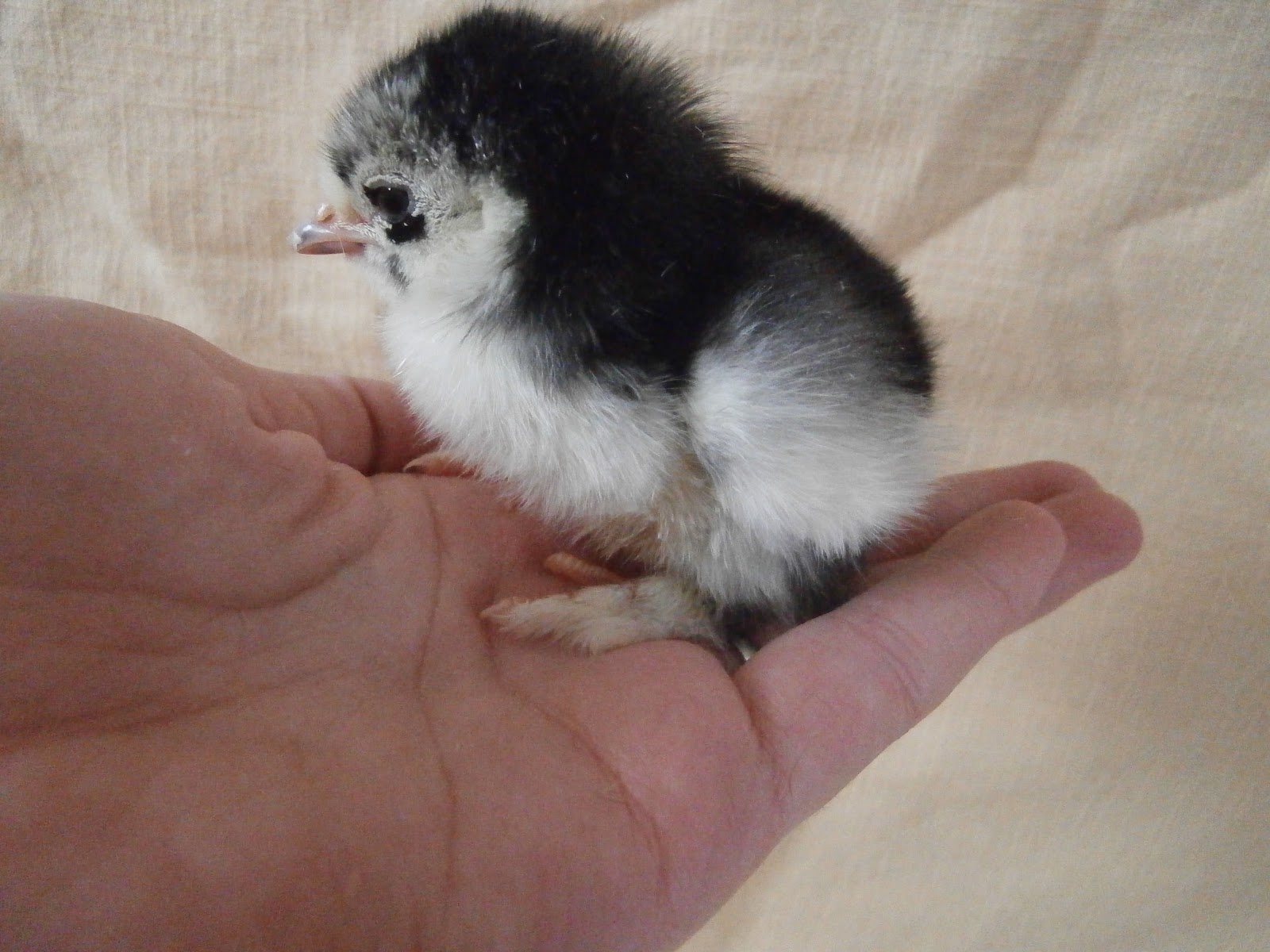 5) I'd like to make more jam.
I didn't get the chance to make any jam at all last year and I've been missing it! I hope to make most of my jam from fruit that is foraged or picked by myself (free!). 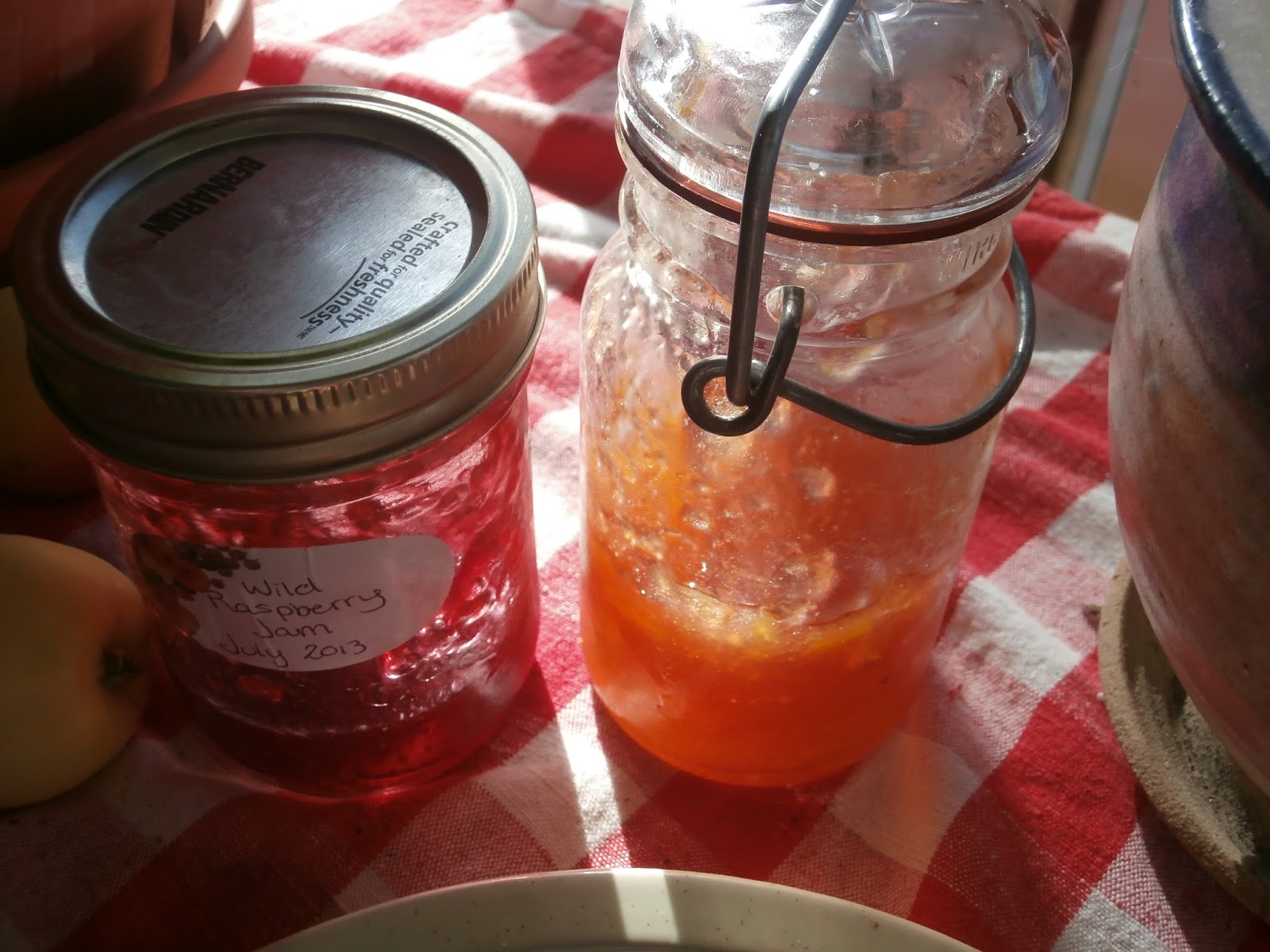 Freezing Rain and a Red Fox

This morning I headed out on the trail to set up my new wildlife camera for a second time. The temperature felt warm, despite the thermometer reading -10c. It's all about perspective. Having been going out in -25c for the last couple of mornings made -10c feel mild. It started to rain as I left the house. The rain drops froze and crackled as they hit tree branches and my coat. The whole forest sounded like a certain breakfast cereal, snapping, crackling, and popping! I walked along the trail for awhile before ducking through the trees and scrambling down a steep hill to the creek. I fumbled around, setting up the camera on a tree, checking the range, and then locking the camera in place. I headed back down the trail towards home, the whole process having taken nearly 2 hours. As I got to the end of the trail, I was startled to see a red fox, just a few metres from me down a small hill. I was surprised because I wasn't being quiet in the least. My snow pants make quite a racket when I walk and the snow was loudly crunching under my feet. I spotted the fox before she spotted me. What a beautiful sight! I have never seen a red fox in the winter before. Her fur was luxuriously full and lustrous. The contrast of the red coat with dark stockings against the white snow was striking. The fox glanced up to see me as I turned on my camera and then she trotted into the brush. She wasn't in a big hurry, but she wasn't going to stick around either. I attempted to take a few pictures, but was disappointed when I found later at home that I hadn't captured her in any of them. Winter can seem so devoid of colour. Seeing such a bright flash of red in a largely black and white world was very memorable.


This is the very first footage I caught with the wildlife camera I got for Christmas! A coyote.
Hopefully in another couple of weeks I'll have some new images from my camera to share!
Posted by Kris at 3:20 PM 5 comments: